7 replies to this topic

Hello everyone! Thanks to the recent activity around the Military Model of 1923, I can summarize the history of the "Model 1923". Thanks to all the experts and forum participants who took part in this! Maybe someone else will correct or add.

The very name "М1923" never existed in the official nomenclature, that is, it was never put on receivers as in the cases with the pre-war modifications of the М1927 and М1928, for example. Obviously this is not even an internal term of Auto-Ordnance, which in an attempt to sell their 15,000 SMGs produced by the Colt Company in 1921-1922, tried to experiment and diversify their products to suit different consumers around the world. This is how the "Military Model" aka "М1923" appeared. I tried to figure it out a bit.

Even in the Auto-Ordnance catalog dated 02/27/1922, drawings of the so-called "Model F of 1922" are mentioned. Which has the characteristics of the "Military Model"

In the rare Auto-Ordnance catalog "Thompson Guns, Models 1921-1923" (also known as the "1923 Catalog"), this model is officially referred to as the "Extra Heavy Barrel Military Model" for the first and last time. 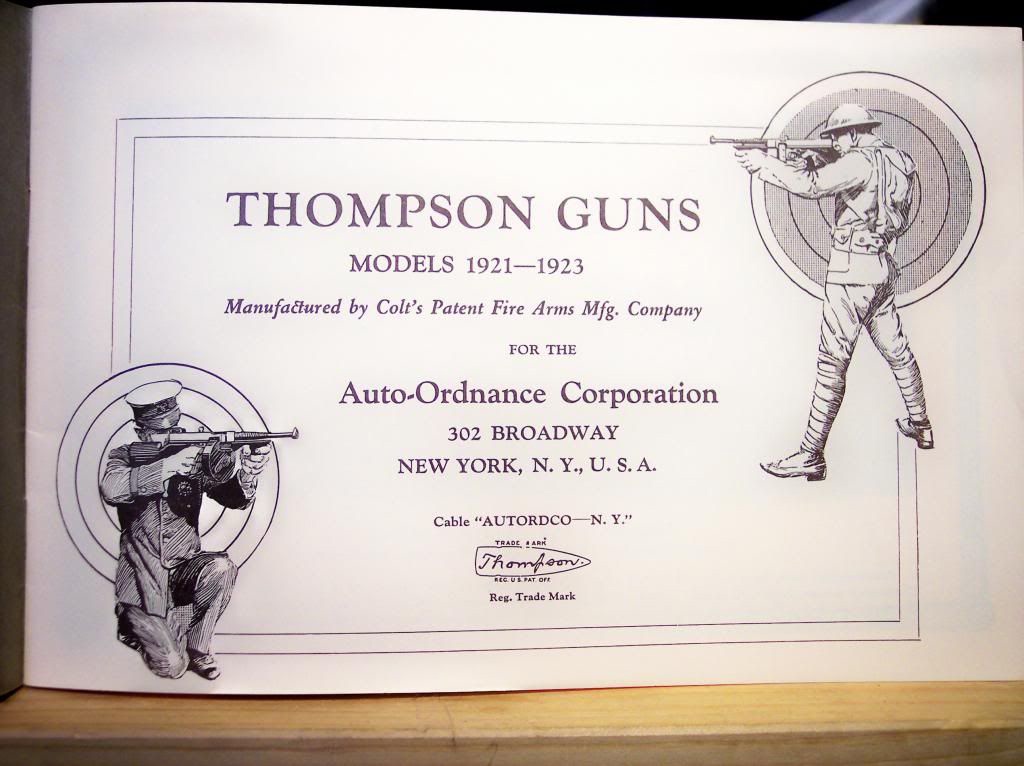 Also in the very rare 1923 Auto-Ordnance Price List, this model is referred to as the "Thompson Gun with Bipod". 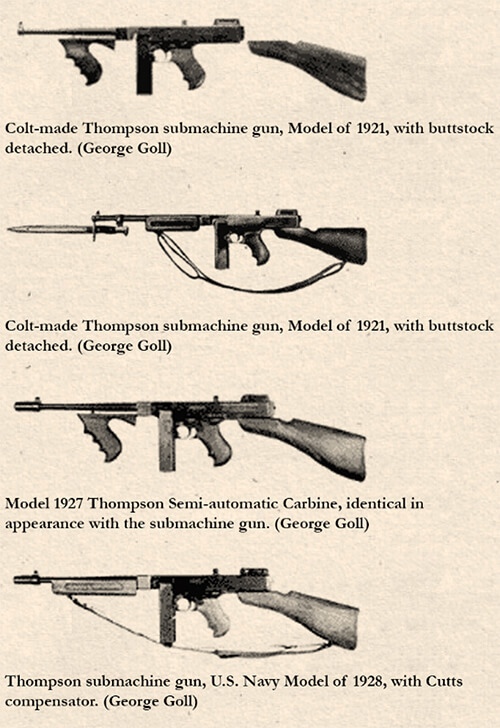 In the Pacific Arms Corporation catalog in the early 1920s, there is a reference to the "Long Barrel Military Model". 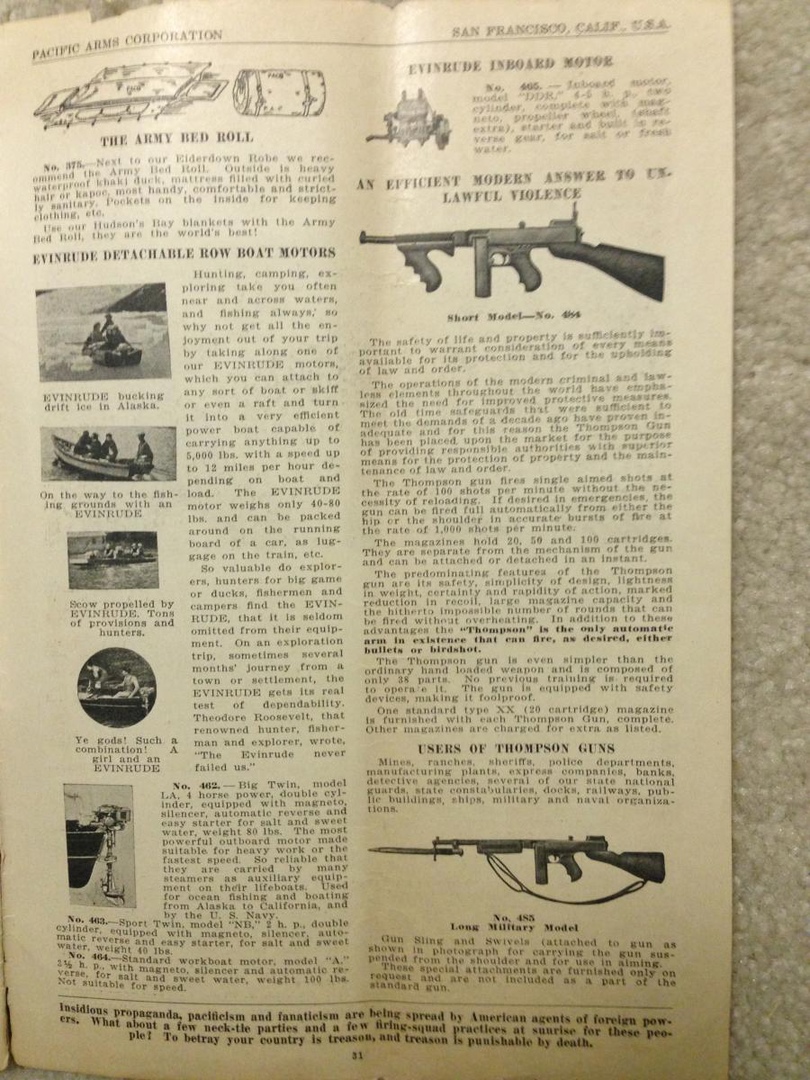 As mentioned above, AOC did not stop at the US domestic market. D.T. Thompson embarked on his first European tour in May 1921. In 1921-1927. Tommy Gun has been represented in countries such as Great Britain, France, Belgium, Spain, Germany, Chile and others. In addition to the standard M1921, various variations were also offered, for different calibers, barrel lengths, and more. The "Military Models" configurations were also presented. 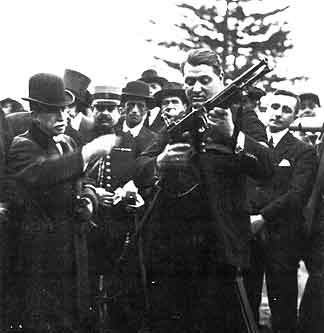 So in 1924, John Thompson visited France as part of the AOC delegation. He demonstrated the Commission D'Experiences de Versailles (CEV) - Model 1921 .45 ACP and Heavy Model 1923 .45 Remington-Thompson with bipod. Commission preference was given to the Model 1921 . However, CEV also requested a couple of "Thompson M1923" models but converted to the .351 WSL cartridge for testing.
Later, according to the "Gazette des Armes" article (courtesy by @rpbcps), one model "M1923" was introduced in the .351 WSL. This is Model No. 3075 which is in the Museum in France. However, the discussion on this issue at MGB made me doubt it. Because the .351 WSL is longer than the standard .45 ACP or even the .45 Remington-Thompson. 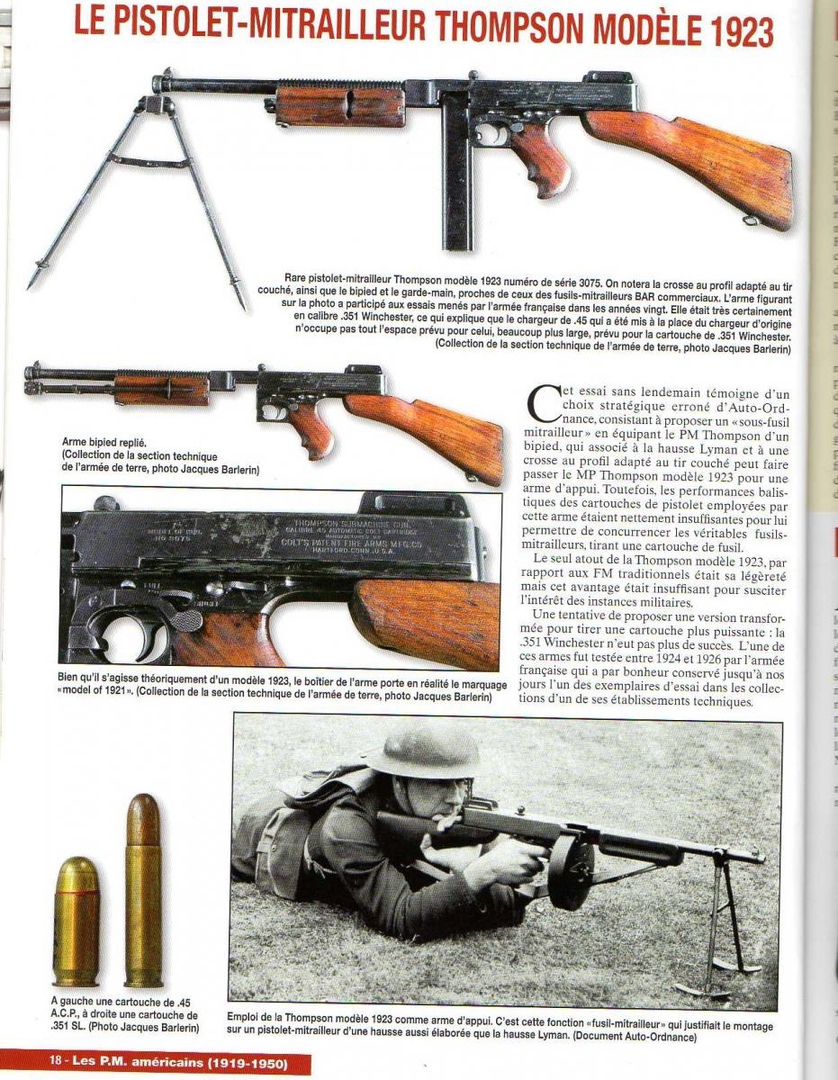 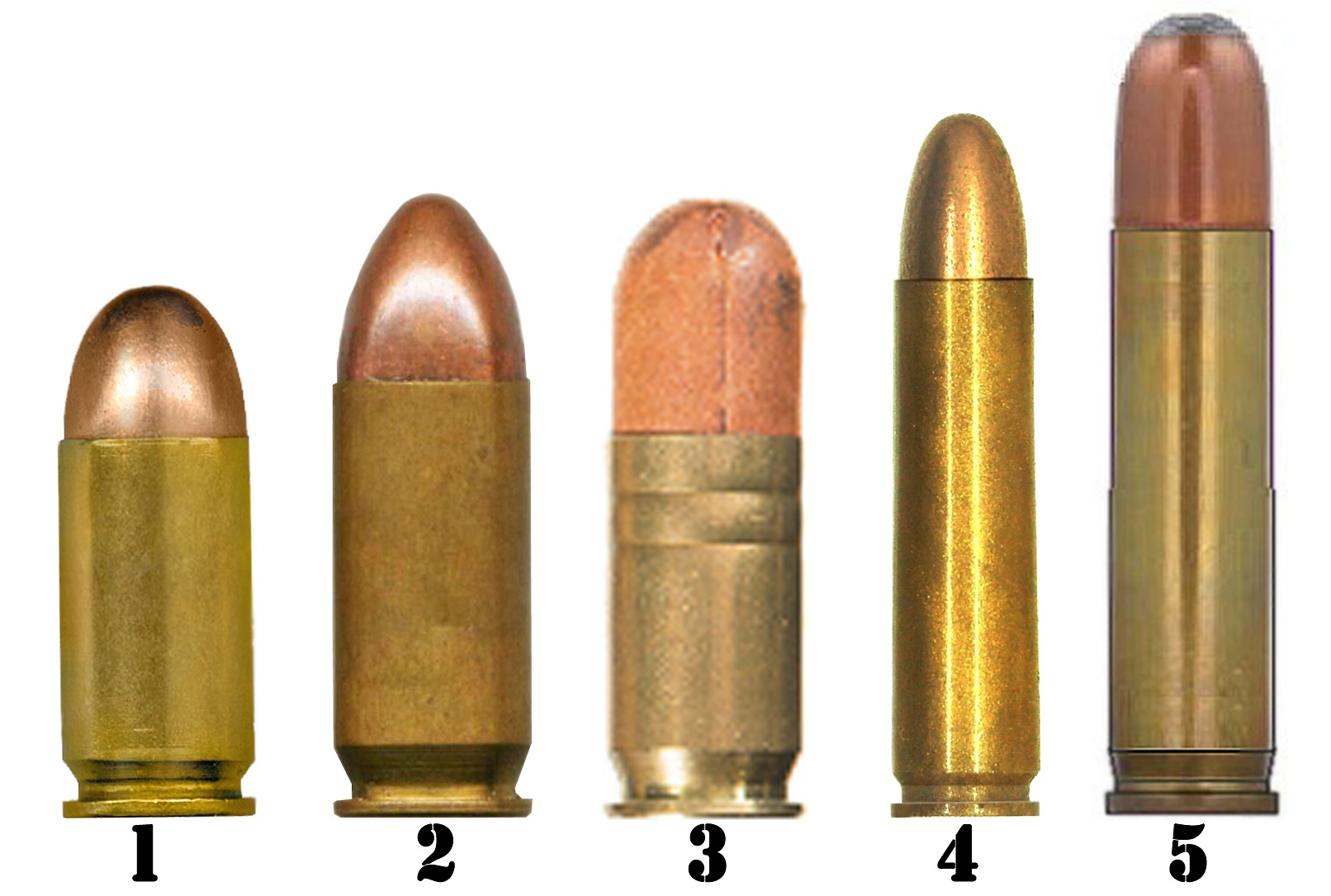 There are at least two known conversions of the Thompson SMG made in 1942-43. chambered for .30 Carbine. This cartridge is 1,680 inches long, which is less than the .351 WSL. However, even this required a new wider magazine and receiver.

Photo from The Ultimate Thompson Book by Tracie L. Hill

As for the stores to use the .45 Remington-Thompson. For this, only a special store would be required, without changing / complicating the design of the SMG itself. As an example of this, consider the little-known Peters-Thompson .45 Shot shotgun cartridge designed for riot control and used with the Standard M1921 / M1928. the length of this cartridge is comparable to the length of the .45 Remington-Thompson, but only a slightly wide magazine for 18 rounds was required to use them. 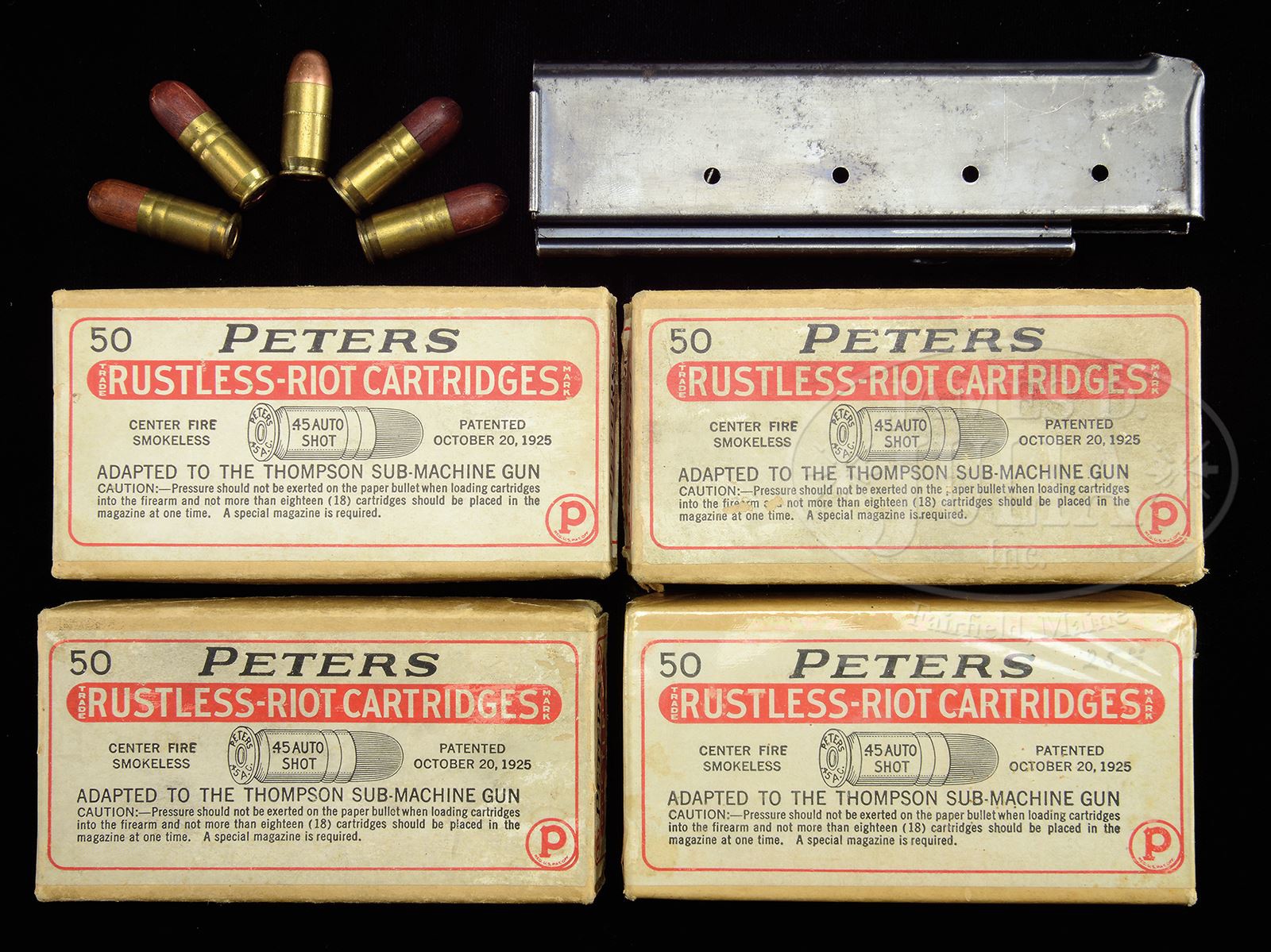 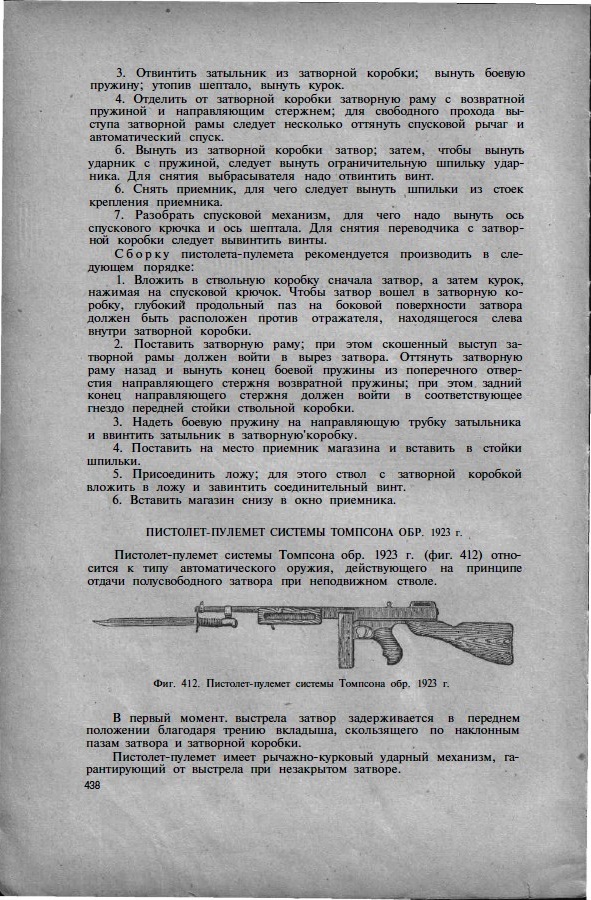 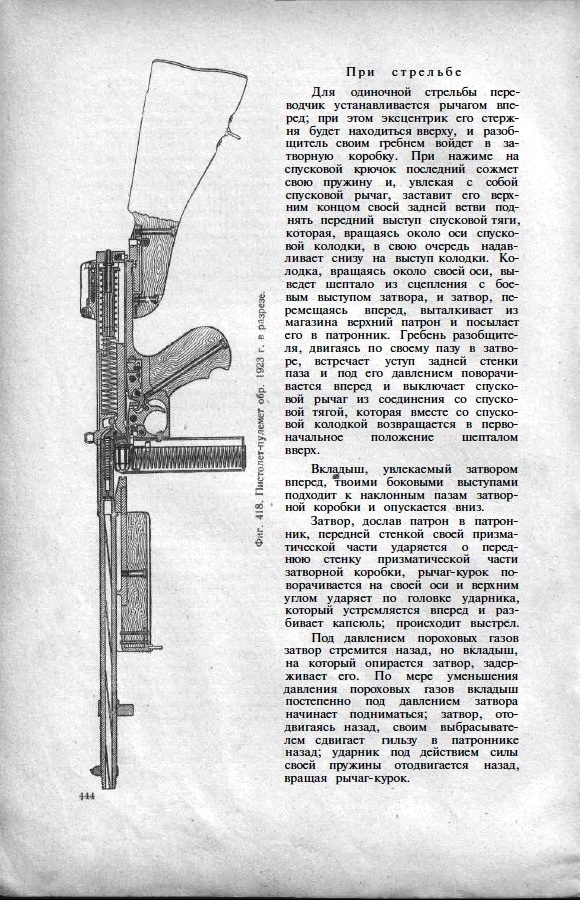 Doug Richardson, after conducting his own long-term research of "Military Models", divided them conditionally into "M1922" (with ribbed barrel and bipod from Colt P75) and "M1923" (with smooth most havy barrel, bipod from Hotchkiss Model 1922 machine gun and Krag Bayonet M1896). He also concluded that only two SMGs were ever made for the .45 Remington-Thompson cartridge - both in the "M1922" configuration. The "M1923" version shown by George Goll in the famous photo was most likely a Dummy. 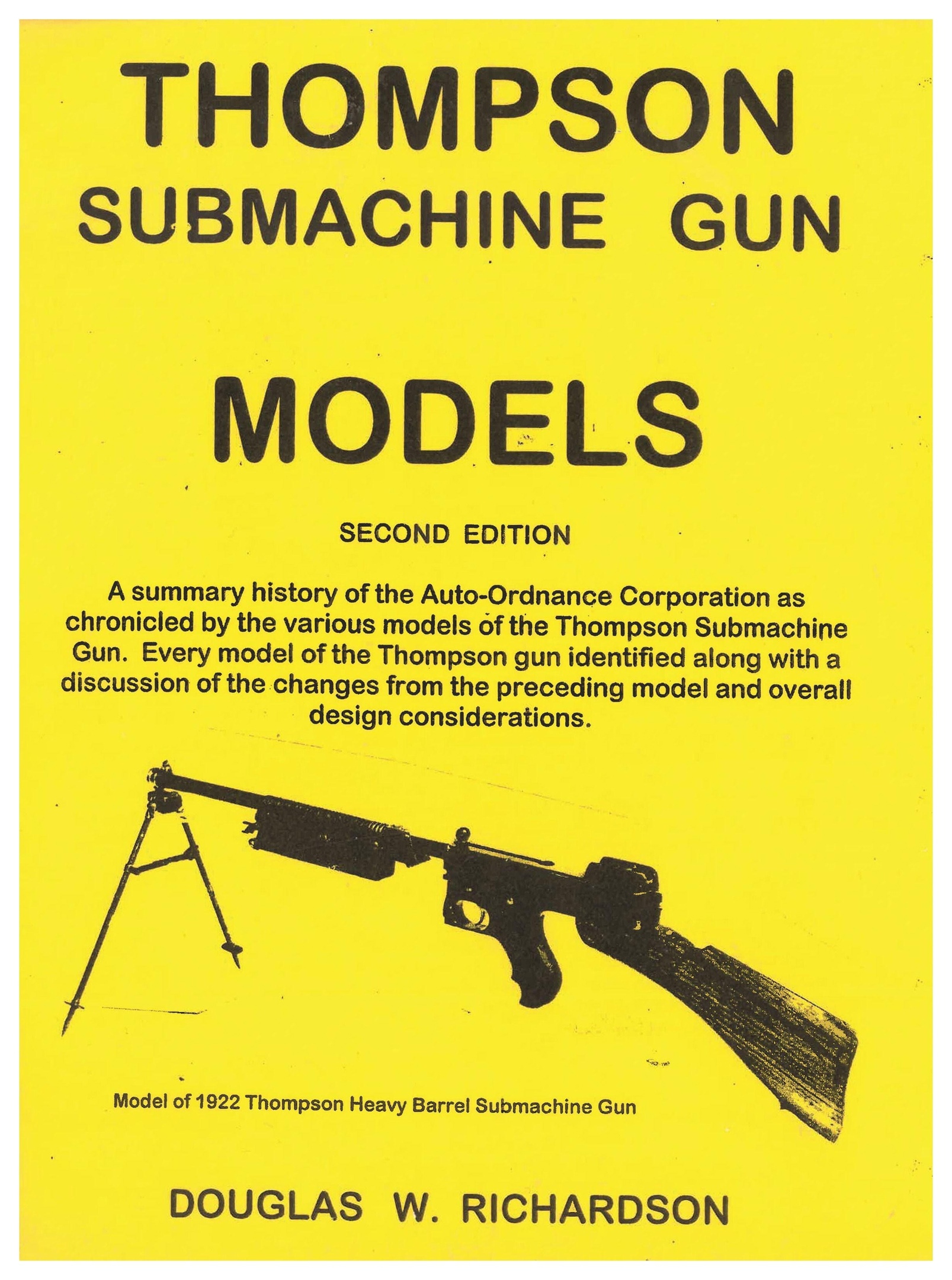 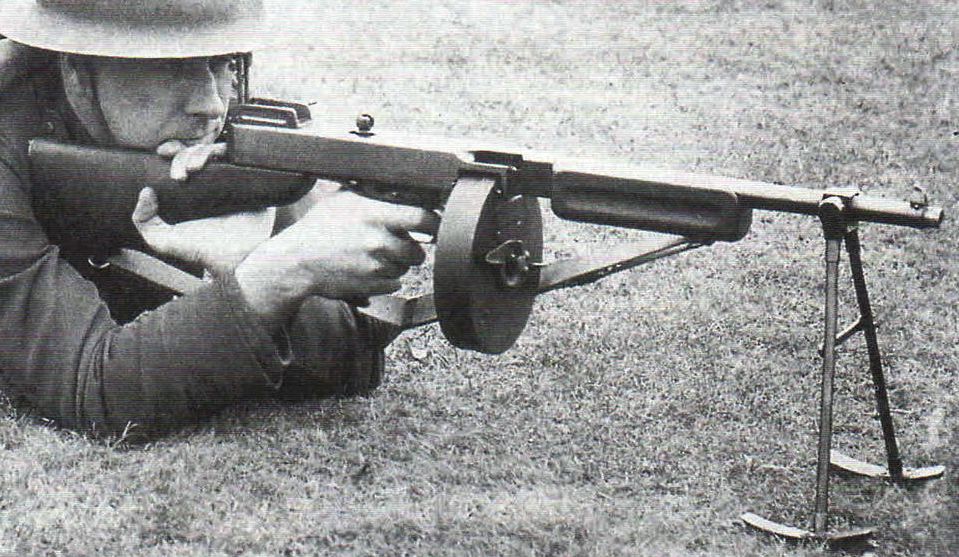 
Also in his book is mentioned "Model 21LB" Colt-Thompson  No2970 chambered for .45 Rem-Thompson. Marked "This Thompson is not a Model 1923. It could be called a" developmental prototype ", a one of a kind special used to develop a product."

In the book "Sturmgever!" by R. Blake Stevens 2004. It is said that in the summer of 1924 in Kummersdorf the Semi-Automatic Rifle (SGew), Regular SMG (MP) and Military SMG (MMP) (all from AOC) were tested for the Reichswehr. Judging by the description, these were Thompson Semi-Auto Rifle M1923, Thompson M1921 and Thompson M1923, respectively. Photo of "Military Model" is attached and the cartridge is listed as a .45 special. This is not surprising because in 1923-24, 615 Thompson SMGs were sent to Germany. Apparently, bypassing the Versailles requirements .. 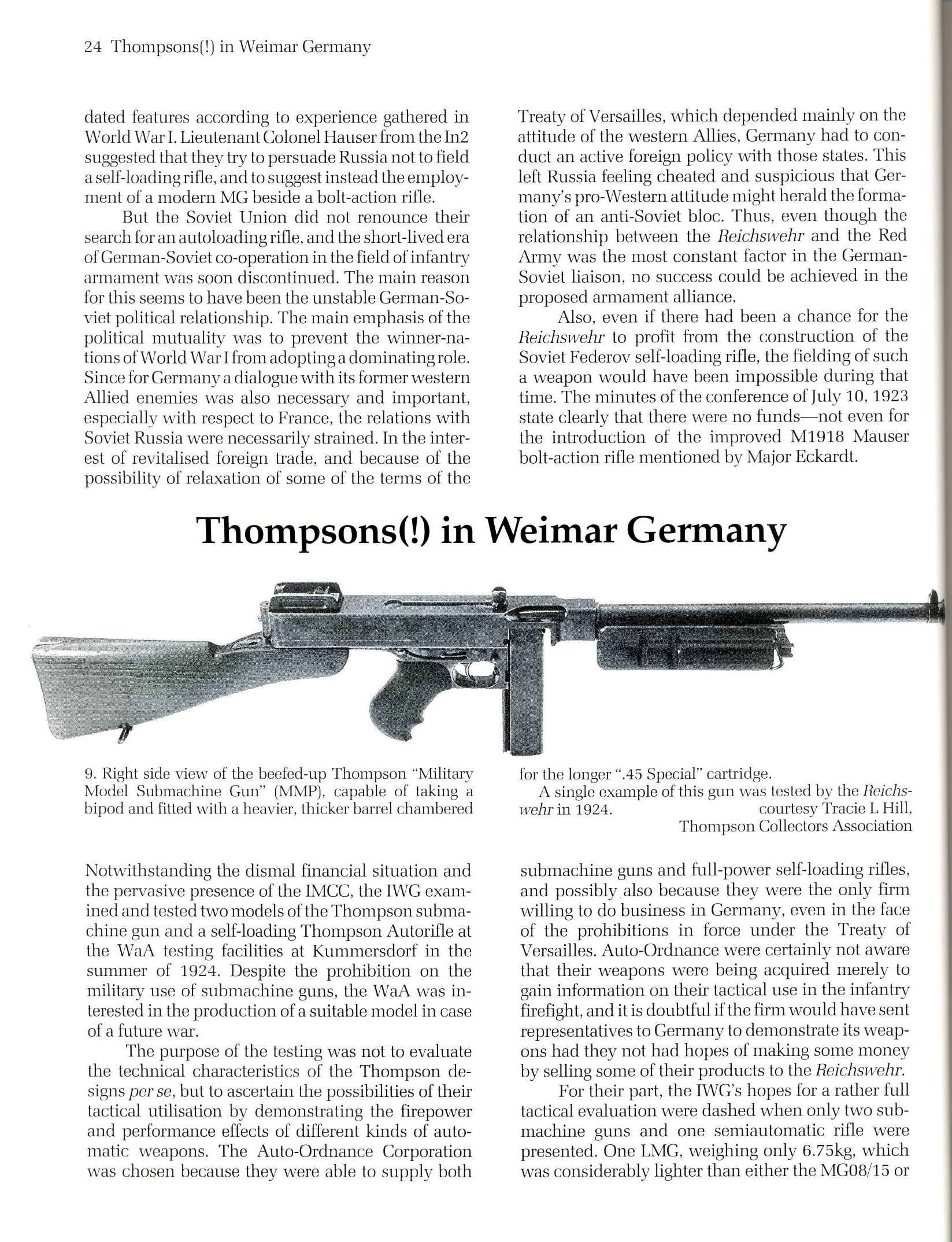 It is also worth mentioning the image of the Chinese Thompson submachine gun from the Beijing War Museum. It vaguely resembles the "Military Model". In the book "Small arms of China during the 2nd Sino-Japanese War (1937-1945)" by Bing Shi, a description of this model. It is listed as a 7.63x25mm Thomson LMG manufactured by the 21st Army Weapon Repair Division in Sichuan Province. 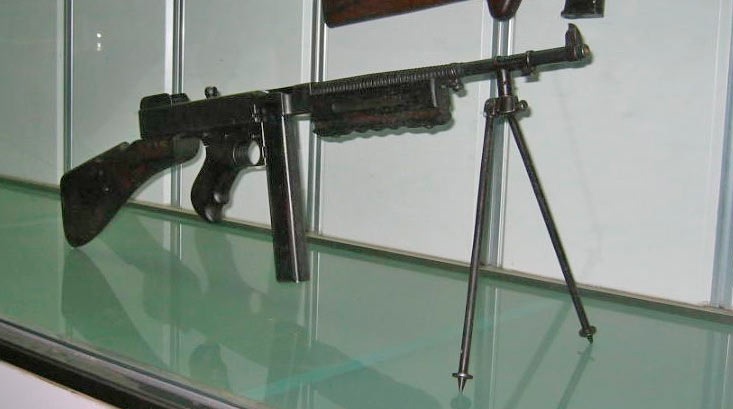 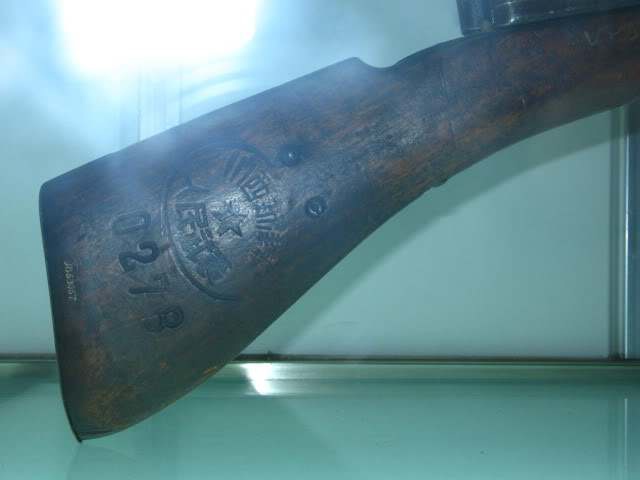 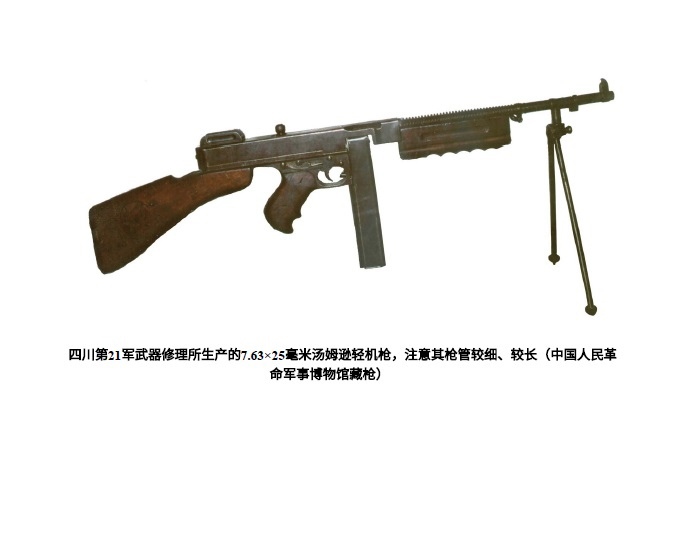 1. No. 1605 - Found in Russia in the Museums of Artillery and Signal Troops in St. Petersburg. 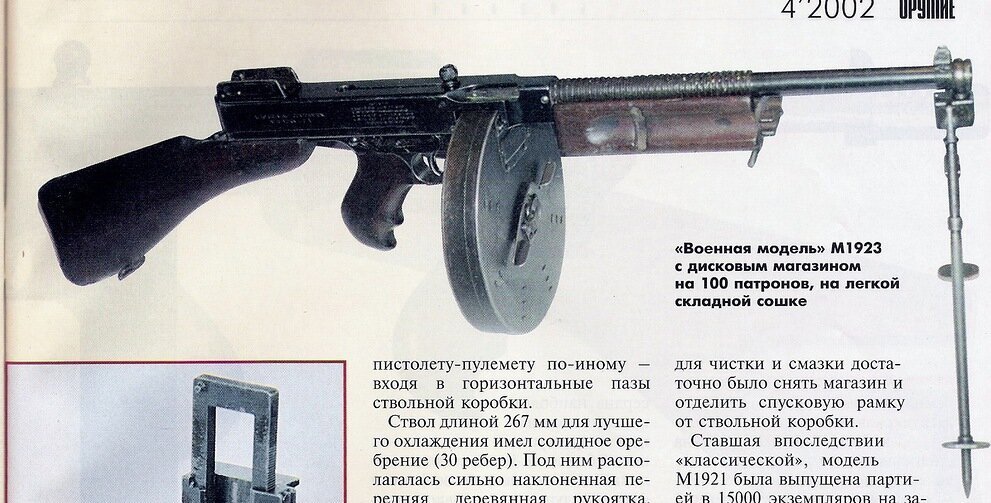 5. No. 3079 - Found in the United States at the West Point Museums. This model is slightly different from the others, it has a smooth barrel and bipod from the Gochkiss M1922 machine gun.

In any case, the story about TSMG has not yet been written to the end, it is fascinating. 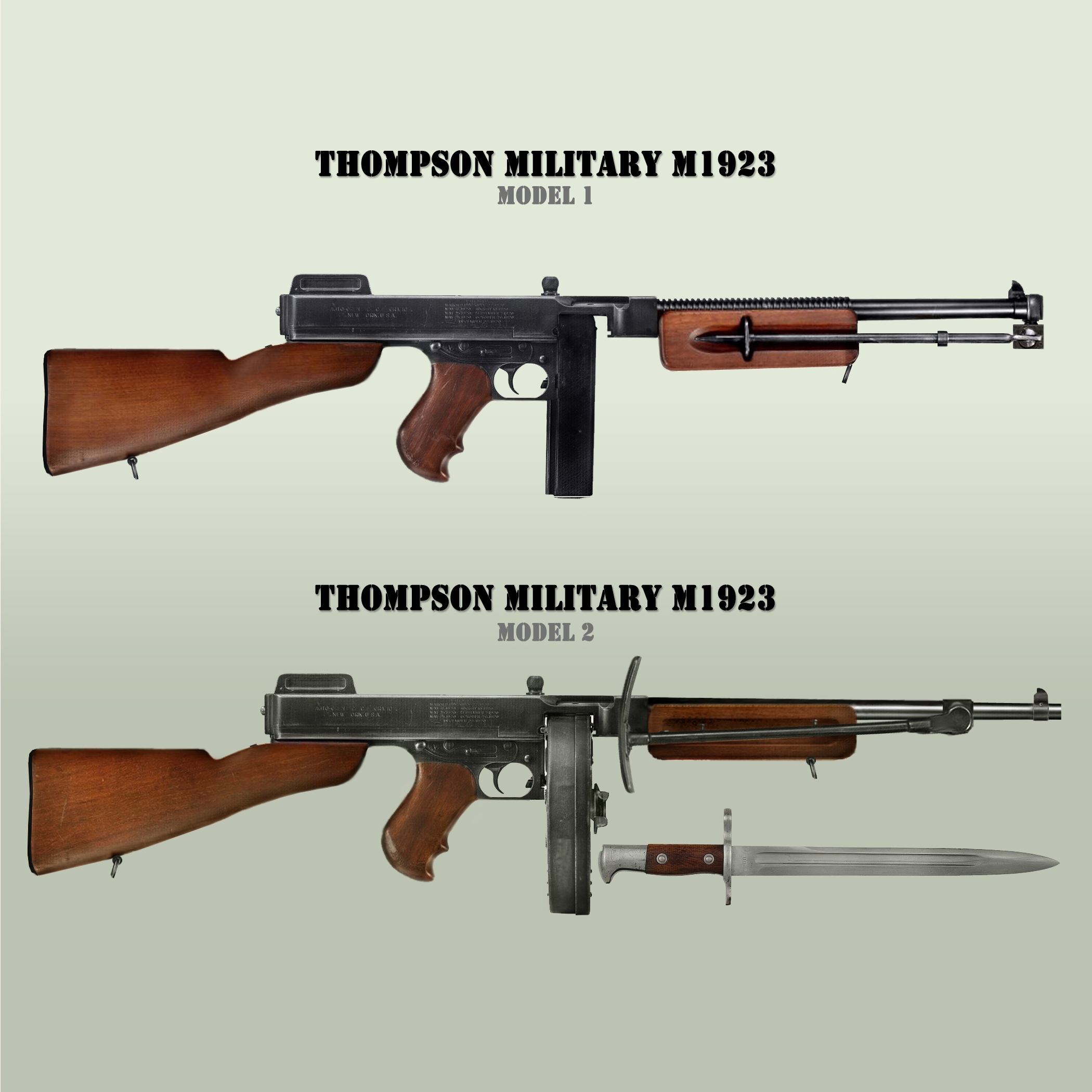 very cool and thank you for posting this information

Well done, this is a well researched and informative summary of information available on the Military Model, (aka M1923 or M1922, "Extra Heavy Barrel Military Model").
In particular, I like the point you picked up that the .30 Carbine and .351 WSL cartridges would require specific magazines made for those calibres. I wonder if our resident specialist on magazines , TSMG28, has any information on the existence of magazines for those calibres.
This post deserves a 'reputation vote' from me!
Stay safe
Richard

Wow.. so much info. Great information.

Trip to see the Thompson with a bipod. I enjoy shooting prone on a bipod..

Even though I have not been able to lay eyes or hands on the .351WSL Thompson in France, I would love to do so someday.  As to Richard's question about the magazines, I assume that any magazines with the gun are prototypes.  Essentially all of the different magazines I have seen that were produced for the .30 Carbine light rifle effort are prototypes.  Since no standard production guns were made in either caliber, I doubt there are any standard production magazines for either as well.

I have discussed the size of the .351WSL round with several members of this forum.  As mentioned above, it is notably longer than the carbine round, so there is little doubt in my mind that a receiver for this caliber would need to have a much longer opening for the magazine.  What does the magazine look like?  No idea, but I suspect it is a double feed style rather than the single feed of the Winchester 1907 rifle, which is the only production gun in this caliber.  I do not believe that those earlier single stack magazines would have been used in the Thompson.  Possible? Yes.  Likely? No.  Those magazines have to fit very tightly into the receiver of the 1907 to ensure positive feeding.  I don't see A-O trying to work around those existing magazines.

Also, here in the U.S., most of the 1907 magazines are either 5 or 10 rounds.  I understand that the French had Winchester make a 20-round version for them for their use in WWI aircraft, which I suspect is why the French asked for a Thompson in .351WSL.  Unfortunately, I have not been able to see or acquire one of the 20-round 1907 magazines.  According to Leonard Speckin, who wrote an excellent book in 2012 on the Model 1907 and .351WSL, Hawk Bullets, who make a true .351 projectile for this round, sold 20,000 bullets to France in one year, and continue to sell around 4,000 bullets per year to France.  Apparently, shooters in France still love their .351WSL.

It is good to get your input on this, I am hoping to get the opportunity to see the .351WSL Thompson in France myself, once we get the COVID pandemic restrictions behind us.

It is good to get your input on this, I am hoping to get the opportunity to see the .351WSL Thompson in France myself, once we get the COVID pandemic restrictions behind us.

Thank you so much!  We will look forward to it!