19 replies to this topic

Have No Connection to nor do I know this seller

Rare Gun! Lower and Upper Numbers Matching is what I Thought at First.

I didnt look close enough. I looked at it with my phone..Never again!!

Thank you TD for setting this one straight,

This one is the First Variation with Patent Dates Not Numbers 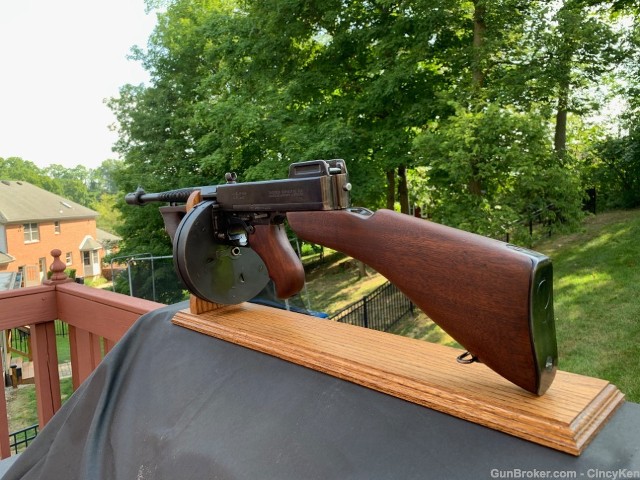 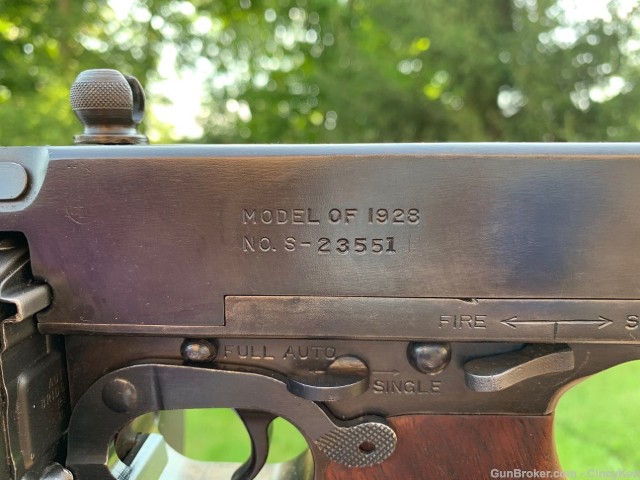 That is Kenny K'S gun or one he is selling for somebody,Ask him about the Midas Thompson. or maybe he sold it years ago.I don't keep up on much of it anymore.If you can get it for 16 to 18 a fair shake. Ron

Agree with TD. There's been a lot of work done on this gun.

Click on the first photo of the gun. Then scroll through.

"The Thompson has been registered its whole life as a "Colt Hartford, Ct."

If the above is factual, George Numrich, the  importer of  both the Thompson receiver and frame from the U.K,  would have originated the BATFE registration Form.  Seems unlikely he would identify Colt, not AOC or Savage, as the manufacturer, unless other owners of NAC suffix TSMGs can confirm their Forms dating back to the 1950's also have Colt identified as the manufacturer.

I own the Thompson.  I just want to straighten out a couple of things.

This Thompson came from a family that had it for over 25++ years.  I also got a near mint 1921A and other rare Thompson items with it.  I am not a Thompson collector... never have been. Yes I own some really nice ones that I have had for 50 years.  When I stumble across rare Thompson items  I call Dave A., Darren and other RKI's on this message board to authenticate. If something is a fake or a POS I give it  to whoever gives me the critique and they can keep it as a sample.  I did this with  Dave about a year ago.

As for the registration.  We all know its not a Colt but that is how it was originally registered.  No big deal that can be corrected by sending the info to ATF.  I have a binder almost  2"  thick with correction letters that I have had to make the last 50 years to keep the registry accurate.

I would like to pay for a eye exam for the expert who posted the image shack photos.   The first picture is my Thompson from the gunbroker add.  The rest of the photos are not mine and  don't even come close to looking anything like the my photos or the Thompson in question.  Why you would post such crap is beyond me unless you need major eye surgery or you are challenged in some other way.

I put in the ad that the Thompson was most likely refinished.   The lower is just the way it came to me.  If there was supposed to be a NAC why would someone remove it?  From what I m hearing it must make a difference in the value..?  I don't know squat about these types of Thompson's.

CincyKen/Ken Keilhotz,
It is my understanding you recently posted S-23551 on gunbroker.com. Several forum members asked me to review the photographs of S-23551 you posted on gunbroker.com and offer an opinion on originality and value. I stand by my above post and can offer more insight to this early Savage Thompson. See:
http://www.machinegu...551#entry129603
This forum has an amazing amount of preserved history. Of course, I have been capturing all the information I can find about the early Savage Thompson guns for many years, hence forum members reaching out to me for my thoughts on your S-23551. I only reviewed the pictures you posted on gunbroker.com.  If any part of my above post in inaccurate, please let me know. I also respect the opinions of David A., Darren and all RKI's.
The fact S-23551 was owned by a family for 25 plus years is interesting. The fact they owned a Colt Thompson and other rare Thompson items is also interesting. I am not sure what this means when evaluating S-23551 for originality or more importantly, value. That the manufacturer is listed as "Colt" is also not surprising. The IRS and ATF used to accept anything on these registration forms years ago. I dare say "Kangaroo" would not have raised an eyebrow at the IRS when S-23551 was born on the Registry. Of course, it means nothing in judging originality and value.
The frame attached to S-23551 is not from the Savage factory. It is from the Auto-Ordnance Bridgeport (AOB) factory. Regardless, it has been renumbered and is not original to the receiver. Since you are just a self-professed Thompson owner, not a collector and not knowledgeable in this area, please do not take offense when someone with some expertise in this area explains what you own. Let me continue, for your edification and those on the forum that purchase my books and ask my opinion on these very expensive toys.
I noticed what appeared to be the "NAC" markings on the receiver and frame before searching this forum for information on S-23551. Since S-23551 was originally advertised for sale as S-23551 NAC in 2013 (along with Colt's NO 5086, which I assume you also obtained from the estate since you recently offered it for sale) I am curious as to who had S-23551 NAC refinished. As you can see from the below pictures you posted and I cropped and changed the lighting, the letters "NAC" were definitely on the frame and receiver as a serial number suffix in 2013.

CROP pix161343430 - possible NAC marking.jpg   70.91K   45 downloads
The Numrich Arms or NAC Thompson guns is another area I have studied for many years and can say without reservation, the NAC markings on any machine gun do not add value to the product. If I were to guess, I would think S-23551 was a 1960s import gun, likely from Interarms, and acquired by Numrich Arms. A Freedom of Information Act (FOIA) request would answer many questions regarding the past history and number of owners.
S-23551 is probably a great shooter grade Thompson gun. However, it is not something that will appreciate in value like an early Savage Thompson in original condition. The original title of the thread said something to the effect S-23551 was something special. Since I had already answered a few inquires, I decided to post a few comments on the forum for the general membership. Each Thompson gun presents a learning opportunity, S-23551 included. I encourage everyone to comment.
I do not consider S-23551 a "POS" but will gladly take it off your hands if you are inclined to give it away. I do like those British proof marks.

People who alter markings for any reason are the lowest of the low. I've been bitten by this twice by the same dealer (one of those "been in the business for 30 years" guys). I'm glad I don't collect anymore. Hope turds like that get theirs in this world one day.

For those who are unaware of the slight differences between Auto Ordnance Bridgeport and Savage produced Thompson, from the pinned 'TSMG Reference Thread Index':

Question; Would  NAC have been part of the registration serial number?

In the case of my 28 NAC, it was imported without the NAC and for some reason Numrich added the NAC.

Apparently the gun in question was registered with NAC as part of the serial number and the NAC was ground off. Seems like this would be altering a serial number.

Its only 3 stamps away from correcting and the next time we see it advertised the NAC maybe nicely restamped on the parts.

Was cleaning out some old stuff today. Ran across the envelope, business card, Form 3 and Form 4 from one of those transactions. Into the shred box they went. Wish my mind and wallet had a shred box where getting ripped off could be "shredded."

I don't know if the deals you are referencing are for Thompson guns and quickly admit it is none of my business. However, as someone that tracks the history of some Thompson guns down one transaction at a time, I hate to hear about any documentation being shredded. What is not useful today may be very valuable in the future as more and more information becomes available. I would ask that you preserve all documentation pertaining to the Thompson submachine gun. It may just help someone in the future from being scammed from one of those "30 year guys." And yes, unfortunately it does happen!

I collect all the history and stamps I can on all my guns. Into the folder they go and will go to the next owner some day. I sold a FA rifle recently for well over market. I think part of the reason was the included FOIA and its history back to a prison warden. Some people pay extra for history. At the least it helps a gun sell quicker.

It didn't involve a Thompson. MG34 and MP44. It was his business card,envelope, approved Form 3 (I want nothing with that turd's name on it in my house) and a submitted Form 4. I save all my approved Form 4's and outbound forms.

If you are wondering or unaware how TD knew that the lower on that gun S-23551 is not Savage manufacture, but AOC Bridgeport...

The FULL AUTO markings on Savage lowers were roll marked on two lines FULL on top AUTO underneath. Savage lowers also have the GeG mark of George Goll.

Also tagged with one or more of these keywords: Savage, 1928