37 replies to this topic

Cool medal - interesting as that service period represents the Cold War at its peak of cloak and dagger work - if only we knew what his service entailed, eh?

He is deceased and I never met him. Going to do a FOIA request. I'm sure what I do get back will look like a sheet of black paper.

Only named SOE/OSS/CIA item I have. He lived next town over from me and was stationed in Saigon in 1970. My neighbor who was with the OSS during WWII gave me a Survival on Land and Sea manual, but he didn't write his name in it. Still, I know it.

I have just finished reading a book by a Peter Kemp, 'No Colours or Crest', who during WW2 was part of the original cadre of the first British commando unit, carrying out attacks in Norway and France. He then served with the British Special Operations Executive, SOE, mainly in the Balkans, but also in Poland in 1944. In Poland he was arrested by the Soviet NKVD and imprisoned by them for a period of time, the cold war had already begun? It is a very interesting book initially published in 1955, with lots of facts about WW2 which are missed in more recently published histories.
He also makes plenty of references to 'Tommy guns' being used during his service. Well worth a read and I am now looking forward to reading his third book, 'Alms for Oblivion'.
This book continues with tales of his SOE service, which upon his release from the NKVD jail and short time blocked in Moscow, sees him deployed to the South Pacific in 1945. The review says that “Although initially tasked with mopping up the Japanese remnants, after the surrender, Kemp finds himself struggling to bring order to the chaos as anti-colonial sentiment surges, first in French Indochina and then the Dutch East Indies”. Kemp eventually finds himself leading Japanese troops, with some Europeans, against local insurgents, another twist in the tale of WW2 that you don’t often hear or read about.
Here is a good review: https://thepillarist...est-peter-kemp/

My father was in China at the end of WW2 helping to repatriate Japanese POWs and provide security against Chinese Communists insurgents. One of the stories told from that theatre is there was an attack expected from the Chicoms in an area with not enough American Marines. An idea was floated to arm Japanese POW's and put them up on the line along side the Marines. Not thrilled with the prospect of sharing foxholes with the recent enemy whose countrymen had killed a lot of Marines, an alternative plan was proposed to place the Japanese POWs with Nationalist Chinese troops instead. I didn't hear how it all ended.

Perhaps you would consider reposting in the photography forum.

Wow, very nice. A V42 has been on my wants and desires list for a while. I’ve seen a couple for sale at prices that are rivaling some M2 carbine machine guns. I can’t justify the price at that. I hope one day I get lucky. I just picked up an OSS stiletto. My secondary collecting habit is combat knives.

I have a WW2 US and German fighting knife, but an original honest to goodness British fighting knive has always escaped me. Not collecting anymore, but a friend who was clearing out a friend's estate gave me this. 1976 NATO marked. And it matches my contemporary DPM jacket. One of my favorite years.

Jim C - I probably should have posted in the photograhy section - TBH I wasn't familiar with that section.

Kilroy - The OSS stiletto is a nice one, with spatula scabbard, a worthy piece for any collection - just be careful of that point it is fragile.

Waffen und Bier - My personal preference is for wartime (WWII) FS - but the NATO marked knives are becoming collectable in their own right now.

Its not to late.

Between 1999 and 2001, I had the pleasure of working on the Haliburton security team in Algiers, during a period of high Islamic insurgency in Algeria and was one of two guys on that team, who were not SAS veterans. One of the team leaders participated in Operation Nimrod and he told us lot of tales, off the record, about that operation over the years, great guys and intersting times.
In 2000, while working on that team, we were also responsible to the security of your former Vice President Dick Cheney, during a visit to Algiers, when he was still the CEO of Halliburton. That was just prior to the announcement that he was running with George W. Bush, as Vice President.

Picked this up at a local militaria show this past weekend. It will display nicely with my SMLE, STEn and Thompson and soon a couple of 1940 Matchless bikes....and maybe someday a jeep. 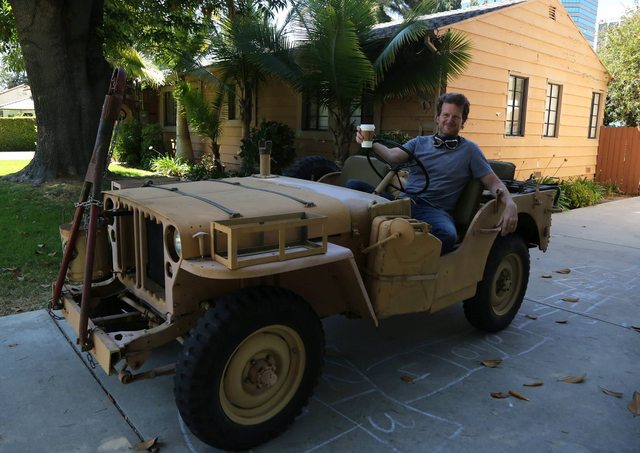 WOW !  AGREAT COLLECTION YOU HAVE.  THANKS FOR SHARING IT WITH US.

LOVE it - I have an Operation Nimrod poster too - but not signed by Phil Singleton:)

Awesome jeep. Maybe someday for me. Thanks!