Advertised as an original all matching "Red 9" but:

The grip panels, also matching, are the fine-lined panels more appropriate to a 7.63.

I have had further communication with the seller.  He makes the entirely plausible argument that the serial number places it in the Austrian Contract and that the out of spec parts were what was in stock and their use was governed by wartime necessity.  I can't dispute that.

Well, you never know what you can't prove and 100 YO guns that have been through two, possibly more wars could be in any condition with what ever parts.  BUT -that is why a discerning buyer buys the gun, not the story , I guess. I could argue in this case that A. Hitler found it in a trench with a broken sight and had the armorer at the end of the trench repair it with what was on hand. Or it could be what the seller says. It all depends on what  a buyer knows, can prove or cares about.  Hopefully the buyer likes it and enjoys owning it.... It looks like a nice gun.

I decided I didn't need a Red 9, especially THAT red 9 all that badly, I got this Modell 30 in 7.63 for a whole lot less.  Not quite as nice and it has a couple of minor issues but nothing that isn't easily dealt with.

I have one like that too- I am happy with it - Always wanted an original Red Nine as well, but sold the refinished one I had years ago.   It was one that Oyster Bay sold back in the 90s. Just not willing to spend the $$ they get for them these days.  the Broom just hangs on the wall anyway. Funny though,  I never see those refinished guns for  sale these days. The problem these days is the guns have gone through so many hands the real history on them is "lost" and the gun story gets better.   They are just a cool piece of history 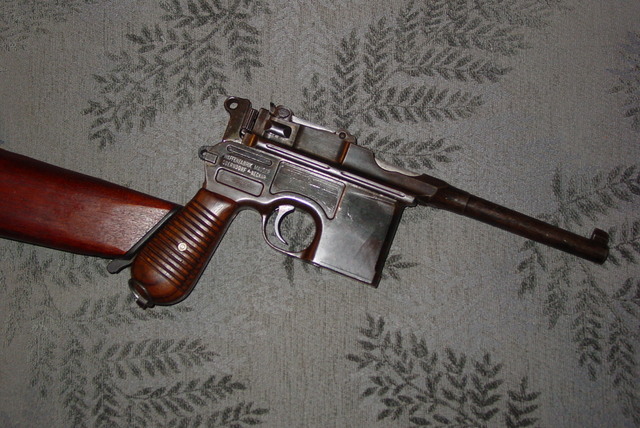 Being an M-30 mine has a little bit better design and metallurgy than the older ones.  It's getting a Wolff spring kit and a newly manufactured bolt stop.  It will be a special occasions only shooter.  I figure a 500 round brick of Prvi Partisan will be a lifetime supply

Always liked the broom handle pistols. I have a pair, a Mauser 1930 9mm and an Astra 900 7.62. I do take them out occasionally to the range. They both work perfectly.

Back to What Is It? - Ask the Firearm Experts Forum