A Workout With Glen's Mag Anvil

So, a few weeks ago I used one of Glen Whittenberger's mag anvils to work over a bunch of f**ked off magazines a friend
of mine purchased from "What A Country". I think WAC must have sent him all the ones they had thrown in their RMA box,
because only about half worked at all, and all of them were rough and beat up.

I did, however, learn a lot about fixing these magazines and using Glen's anvil. And though I am not an expert by any means,
I will explain what I did, and others can comment and correct.

The picture below shows the anvil along with a modification I made to it at the bottom (which will be discussed in a bit).

Unfortunately, this usage does little to obtain two of the three principal lip dimensions necessary for the mag to function properly.
In a post quite some time ago, PK lists the three most important dimensions; namely, .22 inch lip radius, .55-.56 inch gap
between the lips, and the hole to lip-top measurement of 2.303 inches.

I measured the diameter of the top anvil elements and saw .444 inches, so the anvil will impart an interior lip radius
close to the .22 inches. I show a picture of this measurement below:

However, without modification, the anvil isn't useful for gaging the other two dimensions. The following two pictures show
the gap measurement and lip-top to hole measurements respectively:

However, I did modify the anvil so that it would assist with obtaining these two dimensions. What I did was to take a magazine
with the correct dimensions, slip it onto the anvil, and then bore a 1/4 hole through the bottom of the anvil, such that the
magazine bottom sits flush against a stop-plate held above a bolt in the 1/4 hole when the mag lips were tight against the
top of the anvil.

The picture below shows the mag on the anvil with it's base almost touching the top of the stop-plate. (It's should be touching,
and because it isn't the lip-gap and hole-to-lip dimensions are off. More about this later.)

A couple more detail views of this modification are shown below:

Note that the washer is being used only because I didn't get the hole drilled correctly for the plate I was using, and I
needed to move the stop plate up a little bit.

For what it's worth, after making this modification, I measured 8.622 inches from the top of the mag anvil to the top of
the added stop-plate. Given the poor accuracy of the equipment I used to make the modification, I doubt the above
measurement is exactly what it should be.

To continue, I figured that for a properly manufactured mag, and given no other dimensional problems, that there must be
a relationship between the lip radius, the lip-gap, and the lip-top to hole dimensions. That is if one was off, it would throw
one or the other two out of whack. For a mag whose bottom wouldn't touch the stop-plate, then the lip-gap would be
too narrow and the lip-top to hole distance wouldn't be long enough.

For a magazine whose bottom touched the stop-plate, but whose lip insides weren't touching the top of the anvil,
then the lips were too tall and too far apart.

After experimenting with several f**ked off mags, my surmise appeared to be correct.

To fix a magazine that was not touching the stop-plate, one could slide-hammer it against the anvil to open the lips until
the mag-bottom touched the stop-plate.

To fix a mag whose bottom touched the stop-plate but whose lips didn't touch the anvil, one could hammer the lips against
the anvil, bringing them lower and closer together.

(Really hosed mags have to have the whole top body squeezed together or pried apart or otherwise straightend.)

I needed to make one further addition to make slide-hammering and shaping effective. Namely, I had to manufacture two
wooden spacers to hold the magazine steady inside the anvil.

Finally, here's a picture of yours truly down-hammering a magazine against the anvil to open the lips:

(Note that you don't want to over down-hammer or you will squeeze the floor-plate slots shut.)

Below is a picture of the modifications I made:

I think the mag anvil would be much more useful if Glen would add these modifications, namely drilling a 1/4 inch stop hole
for both the 30rnd and 20rnd mags, as well as supplying the stop-plate and wooden spacers.

One other very useful modification would be to lengthen the steel spacer he's welded under the anvil top and drill a hole
in it of a size and location such that a pin could be inserted through the mag catch hole and into this mag anvil hole to
provide an exact gage of the lip-top to mag hole distance.

Thanks for the ideas, I bought one too, and only found time to redue one mag so far. Kind of needed three hands to make it work as it was so it will be good to add some of your ideas.
Dan

Lots of good info. Thanks.

Any reason a hole couldn't be located in the back of the anvil pillar that correspondes with the mag catch hole, and insert a pin to ensure correct feed lip height?

Nice work! I also noticed the room for improvement on the one I purchased. It was kind of clunky to use as the mags were not held in place. I was going to weld additional blocks on to steady the mag...but your wood solution should work out nicely. What I did not think of is the adjustable stop...was going to mark the shaft and set in the vice for each size. Seems like you nailed it pretty good...will rethink what i was going to do.

Being in the market for the anvil myself, I'd been wondering about the lip height part of the equation too. Nice piece of development, Catnipman!

Now I'm wondering about Doug's idea of having a hole in the bar for locating correct top of lip to hole distance. Is it possible that such a hole could be used as a pry hole for forcing the lips up when the distance is shorter than spec? Moderate downward pressure applied on the magazine in this manner while hammering the lips might do the trick without the consequence of mashing the bottom plate lips together from the down hammering.

Rich, based on my experience of the amount and nature of the force needed to open
the mag lips by down-hammering the mag against the anvil, using a pin in the catch
hole against a hole in the anvil to lever the mag down as a means to bend the lips
upward isn't going to work. What would happen instead is to twist the crap out of
the rib metal around the catch hole.

I think an anvil hole and pin could be used as a gage, though, so one would know when
to quit down happering.

By the way, the back bar on my anvil isn't long enough to drill a hole where the catch
hole in the mag is. In fact, my back bar ends almost exactly in the middle of mag catch hole.

Phil, I agree with you regarding the value of a book or online organization of some
of the move valuable information posted on the board.

It would probably be relatively simple to do a webpage-type of copy of some of the
more useful posts to another part of this site and include links to them in the
existing FAQ.

A technical book regarding the practical care and feeding of Thompsons and their accessories
based on information extracted from the board and other places would be a very
valuable thing, but the time and energy in writing such a book would be quite large.
Whoever did this would need to recover the value of their time in terms of the price
of the book, which no doubt be worth the price to the buyers if the book was nicely
done.

I for one would be willing to waive all copyright issues of everything I've ever posted
here regarding usage in such a book, so long as I was given credit in a footnote or
other reference in said book.

Phil, you are a very astute predictor of the future.

Anyone got one for sale?

I gotta bump this back up... I got a pile of 60 mags for under a buck each, and of course you get what you pay for.

Does anyone have one of these? I need one!

After re-reading this post, it seems one could make a mag insert that would fit precisely inside the mag, for removing dents etc.,and establish all dimensions mentioned. By indexing off the mag hole with two locations, both 20 and 30 rounders could be done.

Thanks for the informative post; I should check all my stick mags now...

Does anyone have any way to see the pics the OP posted? This is great info

What do they look like? Anyone have a photo?

What do they look like? Anyone have a photo?

Here is a Glen Whittenberger's anvil.

It would be nice if any new magazine anvils could index off the magazine catch position and also was the full magazine body diameter.  But long enough to be secured in a vice. Similar comments to catnipman comments above. I made some wood spacers to fill out the magazine body but indexing inside the magazine is up to the user.  I would leave that to any of the numerous engineers on the forum.

I would gladly test a new anvil and compare it to my Glen Whittenberger's anvil. 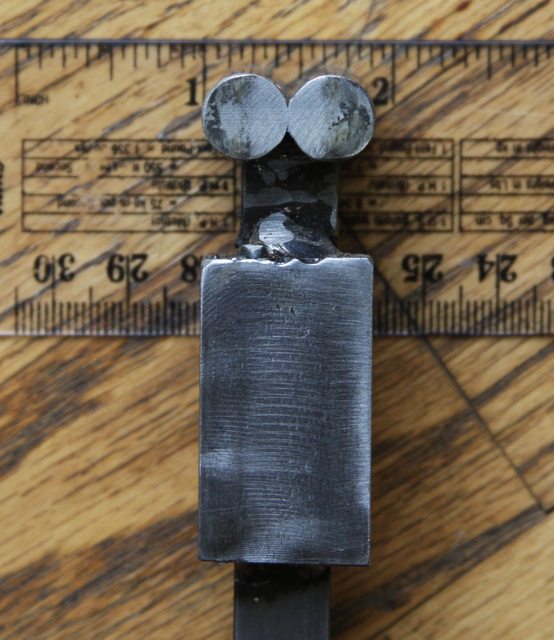 Part 2 photographs of Glen W. anvil with wood blocks (oak) that were made to keep the anvil from rocking back in forth inside the magazine body. 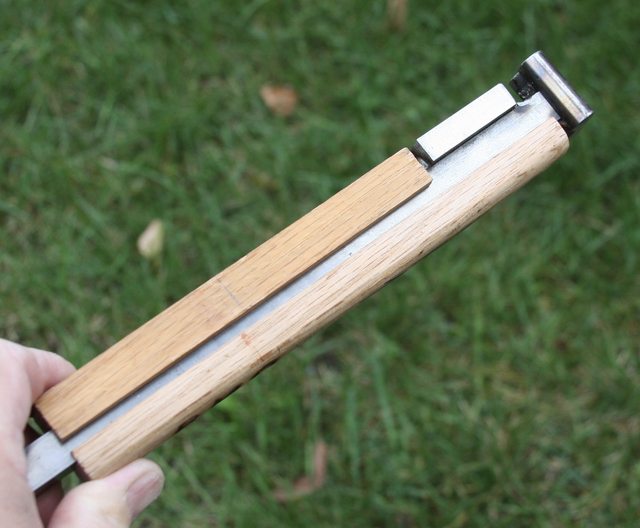 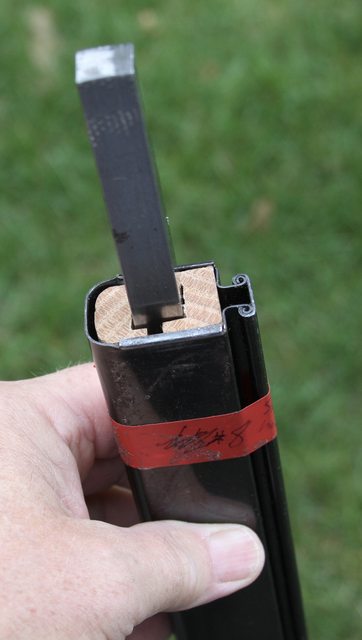 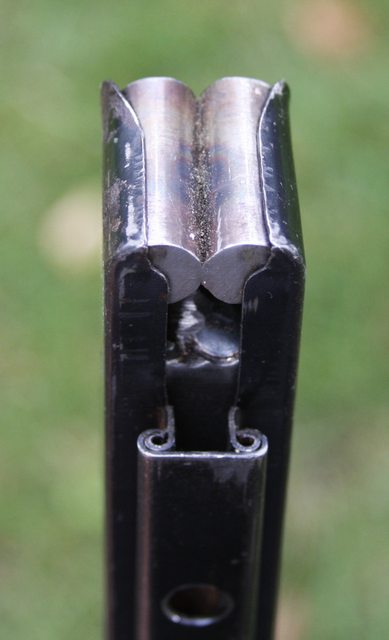 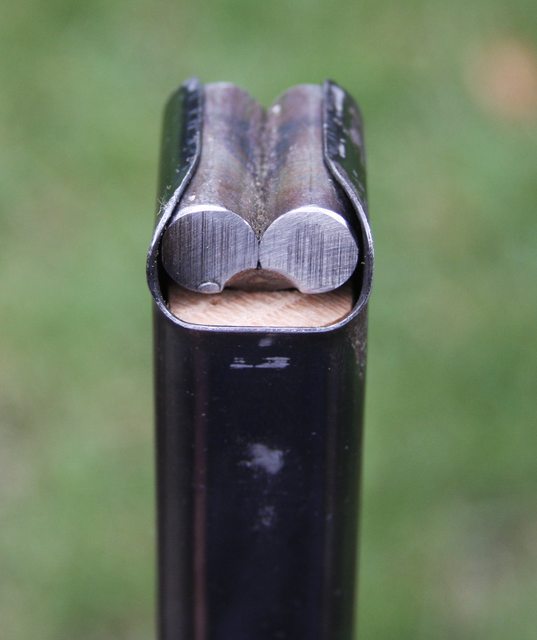 Who did the wood? I was hoping this is what were talking about. I have one, it seems to have cut outs on the top that measures the lip separation.

Who did the wood? I was hoping this is what were talking about. I have one, it seems to have cut outs on the top that measures the lip separation.

I made the wood pieces, I also made some wood pieces that are the proper length for 20 round magazines. I think the ideal magazine anvil would be machined as a single piece that one could slide into the magazine body and have a stop to prevent from being inserted too far.