Glad you brought this up as I just ran across the ad on subguns. I believe this is the same Commerative that someone has been trying to sell for an awful long time at 10,500 or so-
Perhaps the seller thinks that lookers would think something is "wrong" with it with the price below what other WH's are bringing priced it 10K higher than them since its so "special" (voice of Church lady Dana Carvey).
We will have to see if his marketing theory is right or not- nothing would shock me but I would be a wee bit surprised.
Thought I had read here these were some of the last made in 1986, think the comment might have been made they might be more so out of spec given worn tooling, I can't remember exactly-may be wrong there.

My view on the commemoratives is they are worth less than the regular West Hurleys - with all the inlay, it doesn't work as a shooter, and at the same time doesn't have any real collectibility value either.

Your probably right there Phil, thing doesn't do it for me either.

But if they had gold plated the whole thing??........... Naw, never mind
No pimp or in the NBA or Rap Music Industry who "might" like it could qualify.

In this offer what is interesting is the display case. The full auto case is sized for the short barrel and apparently very few were sold with the guns as they were relatively expensive when compared to the price of the gun.

EDITED TO ADD:
Dug through an old ad. The full-auto version of the Korean War Commemorative Model 1928 Thompson sold by American Historical Foundation went for $1545 in 1984. The display case was another $225 on top of that.

One unmentioned aspect is that they ARE C&R guns. I have seen a couple here in Minnesota that the owners have had sandblasted and Parkerized. they look much better after all the gold crap comes off. They almost look "normal". BUT they are still C&R guns.

I've even thought about buying one and doing this IF I found one cheap enough....

You are correct, they are indeed C & R guns. I have a 1928 WWII Commemorative which I have shot over 7k rounds through. It always runs perfect with no misfires or problems. Don't worry about the gold inlays. They wear off after enough shooting and cleanings. I have all Savage parts in mine. I bought it as a shooter. If I had a real expensive Thompson, I would shoot the crap out of it too. They are for shooting, not collecting. I keep all the gold parts, fancy stock, and forearm in a box. Spare parts I guess. They are good for people in C & R only states. I wouldn't trade mine for a Colt.

I've never seen one of those up close. Does it actually have commemorative markings engraved on them on the receiver?

They have all kinds of engraving inlaid with gold on both sides of the receiver. To me they are just a shooter. I know it is a big hit when we go shooting. Everyone wants to shoot my Commemorative. It runs my N.Y. L drum without a hic-cup. If you want, I can e-mail you a couple of pics showing what is left of the inlays.

I've got some AHF gallery photos the Korean War Commem. E-mail me if you want me to e-mail copies.

Or if somebody here with Sponsor status wants to post them here I can e-mail to them.

Yea guys, I'd love to see pics of the receiver markings on those.

had one ,sold it> nothing special!!

we surely can afford to spend more money......we have to keep the dream alive!

I bought my KWA gun as a shooter. It already had some blems. I picked the gold inlay out with a toothbrush. Bought some GI parts from time to time. Put a Cutts comp and Lyman sight on it. (which I now regret) Finished some NOS wood.... 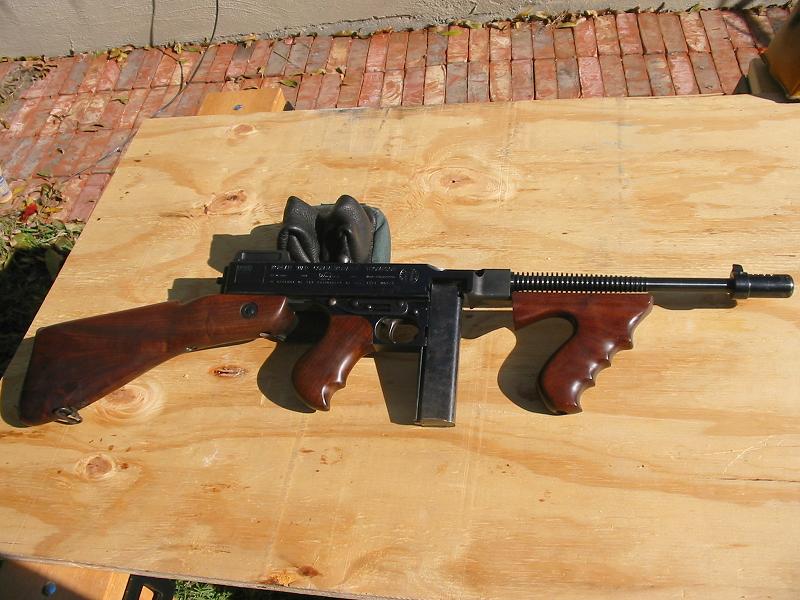 I've spent more than I should on the parts, but as it stands I don't think I'm upside down with it. In retrospect I would have just put the aperture sight on. The Lyman sight was way overpriced, and really doesn't add any functionality. The WH sight had to go, it was truely a POS.

Nice looking Thompson no matter how you went about it. Way to go.
Mark

I'm thrilled with the accuracy from the wanna be Lyman site.
It doesn't look as pretty as the original but it hits every time.
I'd be afraid to swap it out and loose the accuracy.

I can testify to the fact that Beechnut really knows how to shoot that gun!

The wood on your KW 28 looks way better than the gloss varnish on the factory version.

Nice looking gun all around.