I ran across this very interesting picture of a soldier with his M1A1 Thompson in a 32 year old gun magazine. I don't remember seeing this one published anywhere else, but I could very well be wrong. These are paratroopers from the 101st Airborne Division "Screaming Eagles" applying facepaint, and sporting mohawks on the eve of D-Day. Just thought it might be an interesting picture to post on the board. Does anyone notice any equipment features that we might be able to learn from in the picture? 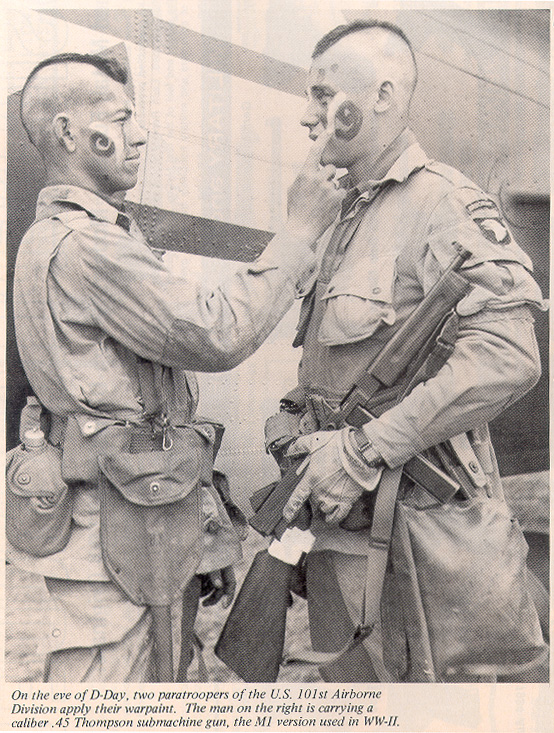 
David, that is one I have not seen before.

Thanks for sharing an interesting piece of WWII history.

That is quite a shot.
I would not want to screw with those guys, could you imagine a
whole division looking like that

Guy on the right seems to have a grenade in his top pocket, and was a better painter then the one on the left

I've seem the photo before. Note the guy on the left has a few "rigger" made ammo pouches on his belt for Garand clips or carbine mags. They carried more ammo in those pouches than standard ammo belts and pouches.

Both have rigger reinforced jacket elbows, and the guy on the right has extra shoulder pockets added to his jacket. They were likely removed from old trousers. I used to have a jacket like that in my collection. It's in a museum in Fayetteville NC now.

Those are Engineers from Regimental Headquarters company 506th PIR 101st AB. That photo is featured on the cover of "The Filthy Thirteen" by Jake McNiece.
This is the true story of the "Dirty Dozen".
Pick up a copy if you get a chance. There are also a whole series of those photos in "American Warriors" by Michel de Trez.
Mark


Those rigger made pouches can hold 2 M1 frag grenades, or 5 M1 carbine mags, or 6 garand clips. Totally versitle they were!
The pockets were taken from new replcement stocks for jackets or removed from old jackets: trouser pockets would have been to large. And the extra pockets always look newer than the jacket they are sewed to.
I have owned a few of them as well. I still have the rigger mod Musette bag with two jacket pockets attached under the flap, one marked 'FUZE' and the other marked'CAPS' on the flaps.
Tons of these photos in the Detrez books.

What does he have taped to the stock? That tape looks like it is holding something, not like a repair.

It is the world famous 'Cricket'! Similar in design to childs novelty it produced a 'click, click' noise when squeezed. Contrary to popular or "ebay" lore these were NOT cricket shaped as seen in the movie "The Longest Day', they were square and of simple design. These were issued to the 101st AB only as means to identify each other at night without having to speak.
As soon as I can find time to post pictures I will.

Pathfinder, is your first name Ed?

And do you live in NC?

Here's a picture of a cricket, although a reproduction.

If you will notice, the 'trooper with the Thompson also carries rigger made "Air Corps" pouches on his pistol belt. It makes me think the he used the Thompson as a prop for the photo, since no other larger ammo pouches are visable. Of note as well is the leather scabbard on the belt of the same 'trooper, behind the gas mask bag which carried a jack knife and pliers commonly used by Signal Corps and demolitions men.


Sorry, no. I'm Chris and I live in Michigan.
look closely at the pouches onhis right side . in the original photo it looks like .45 rounds peeking out like the tops of two thompson mags in a deeper version of the rigger pouch. I have seen these rigger pouches made for Thompson mags both XX and XXX. In 19 photos in this series in the De Trez book this is the only photo I see of this guy. In the 8 photos showing men with TSMGs can you see anyone carrying a Thompson who is wearing anything like Thompson mag pouch!! Lots of those short rigger pouches though?!

Anyone know why these pouches seemed to vanish after Normandy?

I wish my scanner worked

!!
In the full series you can see that most of these pouches tied shut using parachute riser cord (550 cord in todays parlance). They were a huge pain in the butt guess. If the AB divisions were used as they were originaly planed (only for the first three days of combat) then this temporary stuff would have been OK.
But as we know they were kept in combat until D-Day+30 or so and I am sure after having to tie thier ammo pouches closed for the 100th time they threw them away. Cursing the riggers all the time!!

Sadly enough, the personal equipment shortages that exisited prior to D-Day were somewhat relieved once the operation had begun. With 2000+ casualties the first day Thompson pouches were most likely available in large quantities.
In one of the Ambrose books it talks about paratroopers rumaging through a huge pile of musete bags on D-Day. Upon realising that these had all come from dead Paratroopers they left everything there and and toook only ammo and other issue items they needed for combat.

Those two guys were, indeed, members of the "Filthy Thirteen."

They were elite paratroopers who landed behind the German lines just before D-Day and were in every major front/battle in Northern Europe in WWII. Also, they were critical to the defense of Bastogne. There were 30 in all, replaced as they died in action; only two survived. Jake McNeice was one of them. Check the following sites for additional information. Regards, Walter

http://historynet.co...ogne_christmas/ This is a four page article (very interesting)!

If you guys have access to a WalMart nearby, I picked up a cheapo $5-10 video about D-Day from the bargain bin that actually has the film reel that all those stills are taken from..... it is quite nice! But yes, as other's have said previously, these two were in one of the two Demo Platoons of HQ CO. 506th. I am at work otherwise I'd give you their names, I'm sure one of you guys who has "American Warriors" could post their names for us.
Beautiful pic.
Jaron Hudgins

Walter,
I've actually had the privelige of traveling with Jake McNiece, and Jack Agnew this past December to Bastogne. They are the only two remaining pathfinders out of the 20 who actually jumped there. The WWII Airborne Demonstration Team (WWW.WWIIADT.COM) actually sponsored their trip over there so that they could be a part of the 60th aniversary celebration. What an honor to be able to meet and converse with these men, and hear firsthand their stories. We (the WWIIADT) performed a commemerative jump in Bastogne(also jumped Normandy, and Holland although I was not able to attend) in honor of the pathfinders who jumped there 60 years prior. We jumped pretty low (first stick~800 feet, and second stick~650 feet). Jakes first comment was "I jumped lower than you guys did" :-)
If anyone would like to know more about the organization please ask away.
Mark