Hi Guys,
I just got a West Hurley 1927 A1. Don't know much about these, but learning fast. I'm trying to date this gun. It says Auto-Ordnance Corp, West Hurley, NY USA Model of 1927 A1 no. 61X. Could this be the serial number? It also says Thompson Semi-Automatic Carbine CAL .45 Automatic Cartridge. I have 2 30 rd stick mags and a drum that I haven't loaded yet to see how many it holds. Was told it holds 100, we'll see after I load it. Any info would be great. Thanks in advance.

Hi mmo.85,
Welcome to MachineGunBooks.com. It appears you have an early 1927A1 Thompson. Click on the link below to find serial number information on West Hurley Thompsons.

If you will post the markings on the drum, I am sure someone here can tell you exactly what you have.

Thanks for the reply. I'll check out the mag and post what I find.

Your gun was apparently manufactured the first year (1975) that Numrich started making the 1927-A1. If you get a chance, please post some pictures.

I have been meaning to post an article I found from a January 1975 "American Firearms Industry" magazine that talks about the debut of the 1927-A1. Here it is: 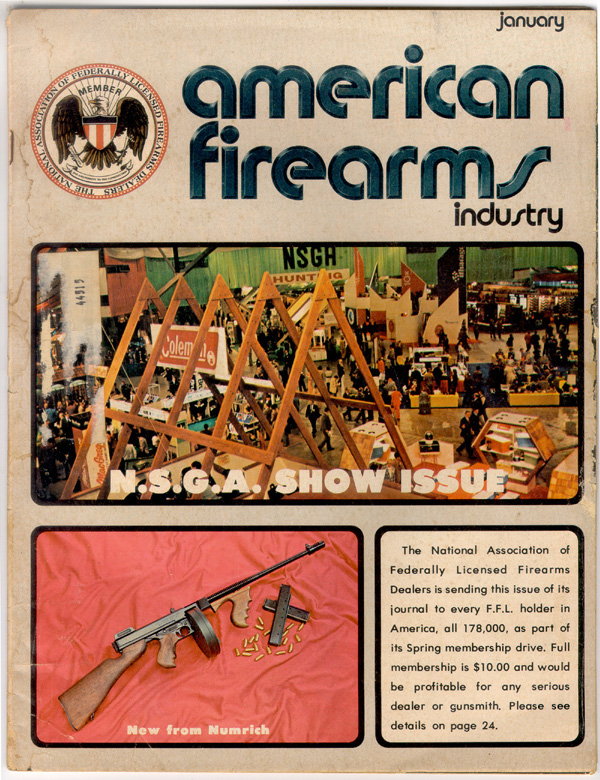 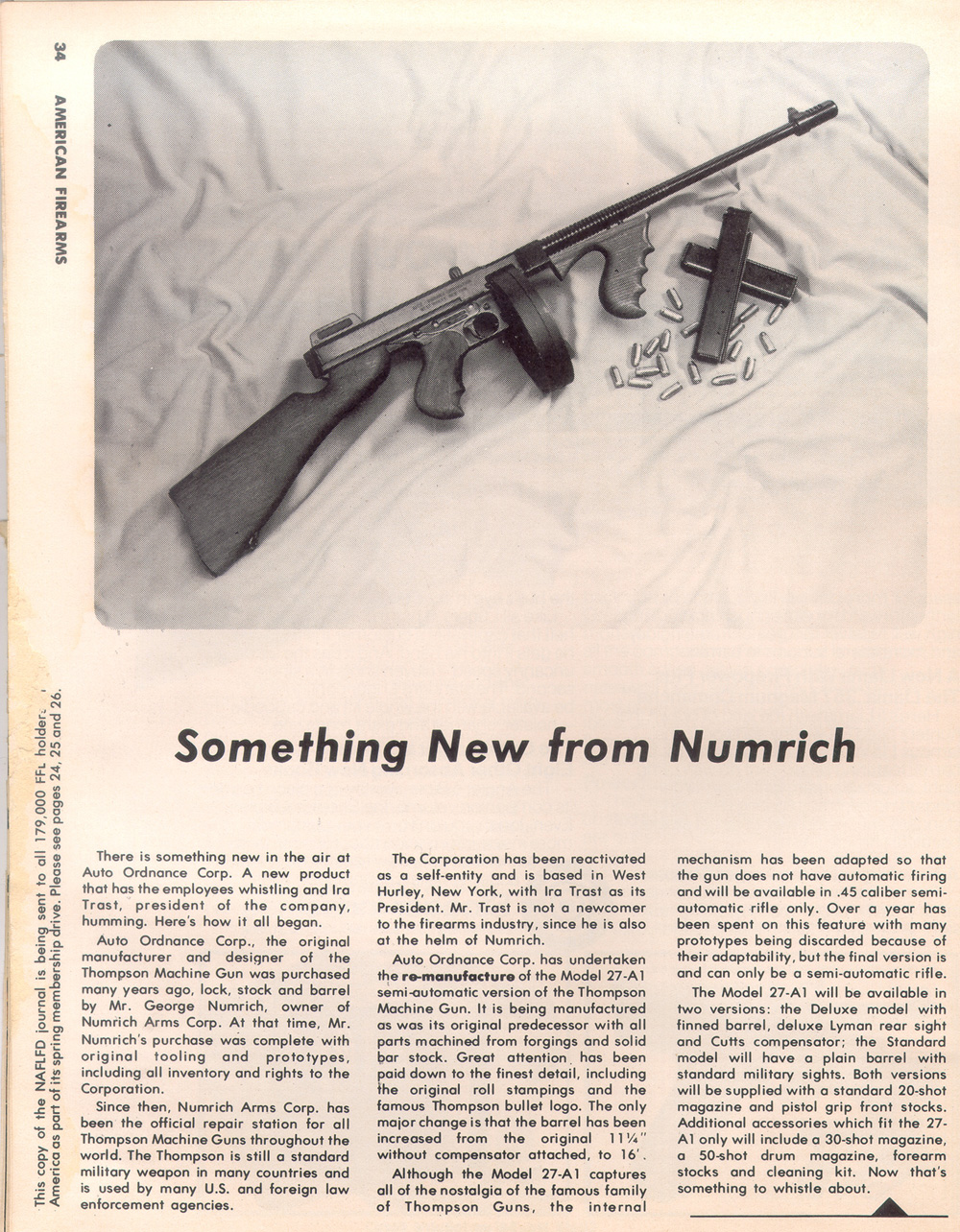 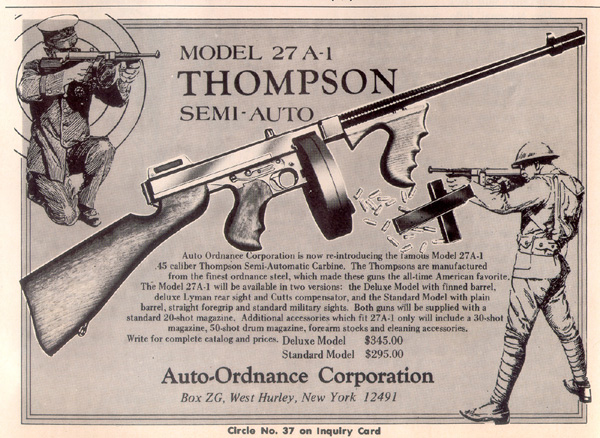 I see a full auto M1a1 type lower. Be interesting to see the left side of those guns pictured.

The serial number list in the link does not include the last few years of production. Your gun was probably made around 1999.

Of course that American Firearms promo ad posing as an article is riddled with inaccuracies and deceptions. Numrich was never sold the rights to the name "Thompson" or "Auto-Ordnance." The West Hurley 1927 A1 was not fitted with a real Lyman site or real Cutts compensator. Exactly which "original" Auto-Ord roll stampings did Numrich utilize? The ones that read "West Hurley, New York" or "Model Of 1927 A1?" The only major change was the 16 inch barrel? Ha! If only that were true.

Lets see?
M1/M1a1 type stock and frame on a 1928 type model.
Closed bolt with out-sized bizarre cocking knob and impossible spring tension.
Indifferent lining up of serial number stampings.
Poor replica of Cutts and Lyman.
But other than that, and of course the ridiculous 18 1/2" barrel, and the overall poor quality finish, it still has more in common with the Underwood typewriter than the famed gangster Chicago typewriter.

I am wondering why all of the photos show a "full-auto" type pivot plate.

I'm kind of glad they didn't go with the 16' barrel mentioned in the article. 16" is much easier to wield. Yes, there were several inaccuracies in that article, but interesting nonetheless...

Inaccuracies â yes. Deceptions â no, not at the listed price. George Numrich and his rights to all the assets of the Auto-Ordnance Division - âNumrich states that, since his company holds the patents, trademarks, etc. on the Thompson SMG, it is doubtful if any other company could produce a Thompson of any kind.â A published George Numrich quote in 1967. Only the Colt purists howl when Georgeâs name comes up. Unfortunately for the purist, George and Company bought it all when no one else wanted anything to do with the Thompson. Arthur, as we have discussed before, follow the trail of the Blish pistol â it goes directly to George Numrich and Numrich Arms Corporation (NAC).

Of course, we could spend a few pages rehashing this topic againâ¦

AF,
We had a 27A1 in the vault a couple of years ago and it had an original Lyman on it. The guy said that he bought it brand new. This was before he became a felon and was converting AK's.

I think that AO of WH did use real Lyman sights until they ran out of them.

I have also seen very early 27A1s for sale that had real Lyman sights on them.

Yes, all the early ones featured Original Lyman Rear Sights, before WH ran out of Stock prior to producing their own version...


Norm, T-Man, Devlin,
The early ones? If that means that some, or all, of the 932 units from the first production year of 1975 had real Lyman's, then by 1976, they all had Numrich "specials" for rear sights. Why attempt to use any WWII parts in the first place if you knew they would never last through the entire production? Was it cheaper to use surplus parts? Of course, but it sure seemed that Numrich didn't invest the money he saved from using WWII parts during the first year when he manufactured his poor substitute ones for the subsequent twenty one years Trast made these pieces.


TD,
Not to rekindle the fires of controversy again, but oh Hell, why not. Why did Ole George wait until 1975, after buying the crates from Willis in 1951, to even manufacture his own full auto 1928 TSMG if production on the semi-auto 1927 A1 model was held up from 1967 because of ATF issues? Could it be that George had to wait out the patents on the Thompson name and the Auto-Ord name that ceased to exist in 1944? Thirty years seems about right.

i had ordered in the first month of producton a semi 27 from them,serial number was #206,came with manual and 30 rd.stick plain cardboard box,the only new in box thompson i have ever seen,wink!!

and it came with the lyman.and wood and finish was better then past one's i have seen and handled. i never fired it, and sold it that same year. the guy that bought it still has it. however he hung it over his fireplace for year's,it got sooty,and he never oiled it down, and over the year's it got patina,and cruddy looking,and i think after he fired it a few time's he never really cleaned it.

My understanding is that normal U.S. patents prior to 1995 expired 17 years from the patent grant date, so most of the Model of 1921 related patents would have expired around 1939 or so. My understanding of trademarks of the time was that they were originally issued for a term of 20 years. In your post, you referenced some expirations in 1944. I'm curious where the 1944 date came from.

Patents of the Thompson vintage were of 14 year duration.

Where did you find reference to a 14-year patent?