Murray Gets A Medal

Awhile back we heard that our old buddy from the land under the land down under was to receive a medal from the Queen for his services in New Zealand. We that know Murray and call him our friend were thrilled. It was in the papers and on the Internet. Well we all know how the Internet can spread rumors and the media can print stories that don't really happen (Gitmo). Well I have proof the Murray is truly a great person, no really I do. Here is a photo that he sent showing him receiving the medal from the Governor General Dame Silvia Cartwright at Government House Wellington. The Medal is the Queens Service Medal.
Murray, you are supposed to look them in the eyes, not the chest!
Once again, congratulations Murray. Does this mean we have to bow down to you? 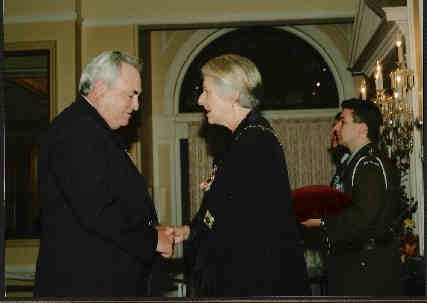 Do you know the nature of his services?

Murray - congrats to you.

I sure hope Murray still visits with us sometimes. I haven't seen him post for awhile.

Just a medal after dealing with all of that? I'd be wanting someones ass on a platter.

Well congrats Mr. Willis! A lesser man would of crumbled long ago.

I hope that since most of us know your story, you do not now have to kill us, Most Dangerous Game style.

I knew there was a method to your madness, in inviting us all down to visit.

All the best to you Murray, Jan and family!

Congrats Murray! Perhaps Phil may now substitute you, a bona fide hero, for his misguided "hero" appellation to the frayed and soiled Felt.

How about a link or two to an article, I did some looking but didnt find anything.

Murray, Congratulations. Quite an honor, but as with many honors, it sounds like there was a lot of pain endured to receive it. The best to you and your wife.

For those interested, here is a link to the government website with the "official" list of those receiving this and other honors. Either search the page for "Murray Willis" or just scan down about 3/4's of the way down and it is alphabetical below the heading "THE QUEEN'S SERVICE MEDAL FOR COMMUNITY SERVICE"

Also here is a link describing the honor, with pictures of the medals and ribbons.

You are all too kind.
It was a huge battle as Phil so well describes.
My dear wife Jan had to deal with major breast cancer and I a stroke, both aliments brought about by stress during the fight.
Mike, Ron, John, Tino, Gordon, Tracie, Frank, Dough, all of you guys and girls have met us and know that we are just simple people that took on the establishment and won.
With out friends and supporters like you we would not have been able to succeed.
Some have asked what gave me the fight. Read about the Scottish martyer George Wishart. Burnt at the stake in 1547, I am a direct blood line decendant of him. He claimed that the Pope was not "God on earth" and paid with his life. My sacrifice was nothing.
Thanks for being so kind
Love to you all,
M & J

I have only met you twice in Phoenix and I thought you were a prince so no medal will change a thank, thank you for you fight and kiss your fine spouse as she justly deserves.


Nice going Murray, congrats, when you come over here to Phoenix in Dec. bring your medal with you for pictures.

Excellant work Murry!!! Hope you still like the M-1 oilers!