Ot, Is America About To Be Nuked!

Read both articles; they are real eye-openers!

Screw the bullshit about racial profiling. This is serious!!! It's a shame that a lot of people in the U.S.A. have forgotten about what happened on sept. 11, 2001. I personally don't care if this hurts someones feelings and they think that I'm a racist. You know what? Fuck 'em!! I just don't want what happened then to happen again. It also amazes me that the democrats are crying about our treatment of the detainees (terrorist bastards) at Gitmo. All I can say is "lock and load" and hope that they don't come busting your front door down.
Dave

Miserable SOB's. NUKE THEM ALL.

However, I could use 80,000 servants. Bound to be a good looking arab biatch n there somewhere.

Nuke Mecca! That'll make their day. They'll be able to pray towards any direction they want.

I'm glad we have a few congressmen that agree.

Be careful now,...we all must be `politically correct` in our dealings with the followers of allah,..NOT!...Why don`t we just send hillary,fineswine,schumer,etc. overseas to deal with this shit,since they are the ones responsible for the domestic softening of the U.S. in the first place!!....that slippery slop has got their slime all over it....now we all have to deal with the fallout,literally...


WTF? The don't allow liquor in their God forsaken pig sty's now. The very meanest? Sounds like you have to be a evil bastard to get there.

The Al-Qaida nuclear scenario has long been my worst fear for the future of our country. Not because of the horrendous loss of life but because it is so very possible. In my view, it's not IF this is going to happen but when & where. IT'S GOING TO HAPPEN.

I believe that our only hope is that when it happens the people of America will finally realize that we are in a fight for the very survival of life as we know it.

Islam is a flawed religion. Those that say that the problem is only the radicals are deceiving themselves. The basis of radical Islam are embedded in the Koran and only needed to be brought to the surface by some evil mind lurking in the sands of time. If it hadn't been Bin-laden, it would have eventually been someone else.

Any religion or political philosophy, taken to its extremes starts to attack those unlike it. People tend to forget that.

Why can't people just wake up, go to work, come home and mind their own damn business? This planet would be great if it weren't for the fuckin people!

I reckon I'll start stocking up on peanut butter and potassium iodide tablets, and load a bunch of mags for my Thompson.


By the way, in case anybody is interested, Islamic religious services are held at the 100 meter butts on the Firing Range At 0600 daily.

...Nick,..the problem is that we as a country are the envy of most of the world...for the most part ,this country got it right and muslimes can`t stand it!..so they base their very existence of bringing us down...

Uh, what about the Mormons in 19th century Utah?

Its amazing how some religions become violent. Heck even within Christianity it happened. The "Church" at one time used a wonderful marketing program. Even if it was in the 13th century. It was simple. Join or die! Even the Kings had to ask church officials before making a decision.

I find it amusing working in "Animal Control"... LOL, I attend many programs based on controlling animals, but I really have to laugh. We think we are controlling various things as humans, but heck we can't even control ourselves.

Yep, the world is a real mess, but humans made it that way.

Think of how things would be if the human population was reduced by, oh, say 50%. More jobs, more food, more land, less pollution, this list could go on quite far.

We say we are civilized, yeah right. We are more blood thirsty than the worst animal. At least they kill for a viable reason.

"Its all so Fucking hilarious"


I may be wrong on this (and it wouldn't be the first time I've been wrong), but I seem to remember from a long-ago religion class in my undergraduate days that Indonesia has the highest concentration of Muslims in the world.

"Scumbag Moslem terrorists are a delicacy. I chew their puny heads off, rip their tiny hearts out and leave their bodies to rot!" says Mr. Kitty.

After having given birth to civilization about 4,000 years ago they're still living in mud shacks
and pissing in their drinking water. Granted, this shit is creating a great deal of unwanted death
and expensive inconvienence for now. However, if it continues to escalate, it will only contribute
to the death of Liberalism in this country, and the unnecessary death of a lot of inocent people.
I doubt very seriously that the international community is going to be drug back into the 12th
century. If it's a culture war they want then that's what they will get. On a final note, unfortunately, I think it's going to take a real nasty event to wake up the people in this country.

Walter--
You are one sick puppy. More! More!

Mr. Kitty may crush their heads, but Mr. Popshots will take them out before they get close to the detonators! 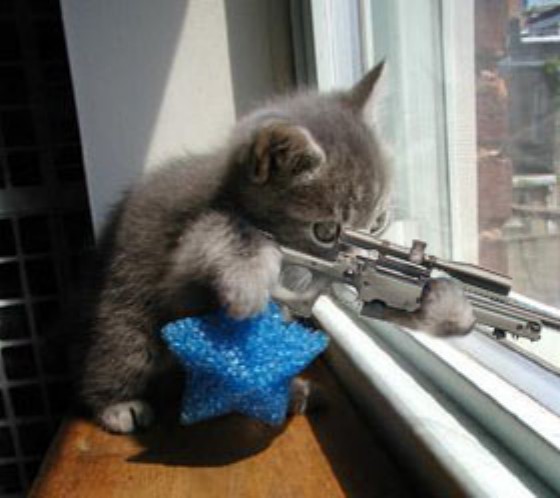