At the annual TCA show Tracie made a comment that there is plenty of Thompson paper (brochures and booklets) out there for everyone, and that we should all get together on these items and decide ahead of time who gets a shot at something in particular....maybe identify ourselves to each other and let the first person to bid on the item take it (finders first?) so we can all get some good deals. And when we have an item, let the rest of the board members have a shot at subsequent items of the same description for their own collections! All we appear to be doing now is bidding against one another and driving the prices of this stuff up to where most of us can't afford it.

I recognize some of the names (I think?) of those of you here on these boards, and I know David Albert has trumped me on many items this past year alone (I wish I had that kinda money Dave!) for his presentation and his sideline Pamphlet sales business. Both of us could have allowed each other better deals! And there are several other regular names I see bidding on this stuff, but I'm not really sure who you all are. Some drop out low and others snipe a bid in the last ten seconds. Honestly, it's tough to win anything at a decent price anymore......get something going cheap and BANG! Someone snipes it at the last second!

I'd just as soon win these items myself and get a bit of a deal on them than have to buy them at a premium from someone else who sells as a sideline business.

So out of frustration,

I'll reveal my Ebay handle in hopes that others will do the same. Perhaps we can keep a list of each others handles and allow the first bidder to have an exclusive shot at an item that they found first. Maybe instead of trying to make money selling stuff to each other we can help each other as fellow TCA Members to get the best deals on these collectibles so we can all have nice collections and still have a few bucks in the wallets!?!

I buy on Ebay as "andefam" (an acronym for "Anderson Family").

Anyone else think this is a decent idea, let's hear from you!

I'm not a price fixing fan, but I have backed off on certain things with respect to the board members and I've "trumped" others also.... It just comes down to selling at the buyers preceived market price. If that is above you then I guess that is just life. I know as a seller I would not appreciate a group banding together to keep the auction below actual value. I do a lot of heads up on Thompson stuff and have bought many things with others help here on the board. My handle is easy to remember, z3bigdaddy.

John,
I understand your frustration. My guess is that what you are suggesting wouldn't work and could actually hurt us as a group. Case in point, Dalbert's recent acquisition of the 1919 blueprint. If the bidding had been kept artificially low someone from outside our group most likely would have sniped it. To the benefit of our whole group, Dalbert made prints of this available for $12, a great deal.

Mine is OOSK. Can't tell you what it mean, I'd have to kill ya'. True Buffett fans know though.

I agree it would be nice to organize and get a good deal or two, but I see the other points made as well. My way of making others aware of my interest in a paper ebay item is to email them (before the end of the auction), either thru here or evilbay, and ask for a copy. I did that will Bill Troy last year when he got the blueprint that he had on display at the past TCA show. Also Dave is making copies of his winnings for all of us that wanted one (see other thread).

I see a few of us out there from time to time, and usually I will snipe if my lowball bid doesn't fly, so you will not know who is really bidding until the bids are all in.


Yeppers I sniped one from that handle once... And I'm damn proud of it.

I believe that your idea and Tracie's is a noble one, and have recently utilized it. Not many people noticed that there were two Model 1919 hand colorized prints up for auction during the past 3 weeks. I was the high bidder for both of them. I bid on the second one for someone else who contacted me to bid on it for them. We might have otherwise bid against each other. That being said, I don't think this tactic will work in many instances. There are bidders from outside our circle who will pay very high prices for such items if they become aware of them. They already have on many occasions. So, doing this does not change the amount I'm willing to pay for an item, but it can reduce competition between friends. It won't always work, especially if several people are interested.

The market is ultimately going to decide what something sells for. I sell manuals and rare firearms books as a business. Compared to other manuals, I don't sell very many Thompson manuals, because I collect them. When I have duplicates, I trade first, and sell if I don't find things worth trading for. For instance, today I'm trading a Yugoslavian Thompson manual, a rare transitional 1940 A-O Handbook, and a 1940 Marine's Handbook for 3 Thompson paper items that I don't have yet. Feel free to contact me if you have something to trade or sell.

The 1929 catalog I bid on last night is one that fills a void in my collection. I'm not planning to sell it. The last few of those that have been available have gone for $200+, so I felt happy to get it for $157.50, because my maximum bid was a good amount higher. It will also help me to further detail the differences between reproduction and original versions of the 1929 catalog. This information will become available to all of us.

I want to preserve as many Thompson paper items as I can. It is a fascinating aspect of Thompson collecting. I will always make whatever I have available in some form to others who are interested. I don't want this stuff to sit in a dark closet. That is why I put together the presentation with SIG, and the book of the presentation, which many of you have purchased. That is why I have printed posters of the 1919 print. I will head out in a little while to have another 20 printed today.

I'm also trying to find an economical way to print another rare poster I have that is a little bit larger. Some of you may have seen it on my table at the TCA show, and noticed another in Tracie's collection. I obtained both of these posters originally, and they are probably the only ones remaining in the world. They served as internal WWII Savage factory motivational posters, and are titled "Tommy Guns at the Front."

Sometimes I don't bid on an item when I see other names that I know have already bid. Mike (OOSK), you have an original Helmer book that I almost bid on, but decided not to since you had bid already. This is not to say that I will do this on every occasion, but I have done so on many occasions.

Again, I will open the material I have to anyone in the community who is interested in seeing and studying it. Most of it is pictured in our current "Thompson Manuals, Catalogs, and Other Paper Items" book. I want others to benefit from the items I collect. There is a lot of history that can be found in these paper items. I wrote an article that is tentatively scheduled for the Feb. 2006 issue of SAR covering some historical paper items I own regarding the Hyde Model 35 SMG. There is a significant Auto-Ordnance connection to the Hyde 35. The history contained in the paper items I own regarding the Hyde gun and A-O would probably never have been known had I not purchased that box of estate material. For me, it is a quest to get the information out there and make more people aware of it.

I can't buy it all. If there is something you really want, let me know. I can't guarantee I won't bid on it, but we can discuss, and I do have a heart. Sometimes I just want to obtain an item to be sure it is fully documented. Maybe this can be done to mutual advantage. I usually know about any Thompson paper items very early on, and decide whether I am seriously interested at that time. You have probably seen that I am a very active bidder. So, if you think that by contacting me about an item, you may alert me to it, you are probably mistaken.

The only problem is if "we" keep the price low it will result in some other person the ability to obtain it at a lower price.

There are probably more nonMembers here who are bidding then vise versa.

Well, it was worth a try, and it never hurts to ask!

I guess everyone of us is a true hunter....hunting for a bargain. I know I have a couple things David was bidding on (Including the british manual that "has been seen in Orange also"....I ended up with the one that's pictured in your book, Dave! (not that you didn't try to outbid me!). I recognized it when I bought your book at the TCA show, along with some others I'd bid on but lost!
Guess that makes it worth a few more bucks, eh?

I'm a bit frustrated by not being able to monitor the end of the bids but I understand that everyone has a right to go for what they want. I just kinda thought there might be a way for us to back off when another of us was already bidding on something.

Good luck everyone! Me, I'll just keep plugging away.
If you see me bidding on something that you really REALLY want, let me know by Email and I'll back off.

BTW, Mike, I didn't know you were a Parrothead!
If Jimmy comes to Indy in the future. let me know and Alice and I will take a road trip to see him with you and Kathy. I'll do the same if he comes to St. Paul or Minneapolis!

If you get a chance to scan in your clay-orange colored "Tommy Gun, Rifle and Bayonet" manual that you won, I would really like to update the picture of that particular version of the manual that was featured on page 42 of our book. By the way, how many pages are in your version, and what publishing date does it indicate?

At the TCA show, I purchased yet another version of that manual that was printed in New Zealand. It looks very similar in color to yours, and was printed by Whitcombe and Tombs Limited in cooperation with Nicholson & Watson, who was the publisher of your version in London. This new version I found is part of a different series of manuals, and is labeled "Military Manual No. 12" instead of "Know Your Weapons: No. 1." It is 59 pages long, compared to the 48 and 63 page versions of the N&W manuals. Some day, I will compare them all side by side to see what the major differences are.

Here is a picture: 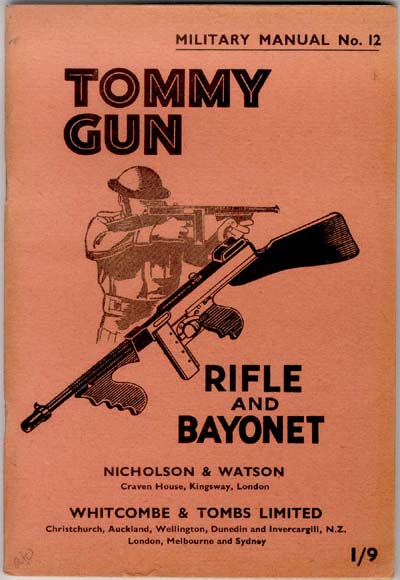