I recently acquired 2 Italian Thompson manuals. These manuals, to my knowledge, have never been documented previously, and I cannot find anyone yet who is familiar with them. What I really like about collecting Thompson paper items is that sometimes items like these 2 manuals are discovered, and can tell us more about the weapon's history.

Here is a picture of the 2 Italian Thompson manuals side by side: 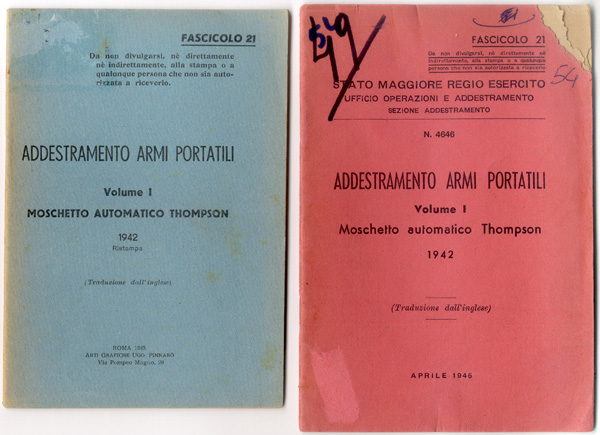 I'm looking for information regarding the use of Thompson SMG's by Italian soldiers, and also looking for someone who reads Italian, and might be able to provide some deeper insight into the origin of the manuals based on the information contained on the cover.

First, a few more details regarding these manuals may help in the quest. They are essentially the same, but printed with different color covers. They are Italian versions of the British Small Arms Training, Volume I, Pamphlet No. 21, dated 1942, titled "The Thompson Machine Carbine." If you have the book that SIG and I put out titled "Thompson Manuals, Catalogs, and Other Paper Items," you can see a picture of the British manual on page 40. The blue colored Italian Thompson manual has a 1942 date, with a 1945 print date, and it indicates it was printed in Rome. The second, red colored manual has a print date of April 1946.

So, did the allies begin training a new Italian army with Thompsons following the war? Could they have supplied Thompsons to an Italian military police force? Maybe some Italians who did not participate on the Axis side, and were trained by the British in Italy following the war, or while waiting for an invasion of Italy while in Britain?

One thing that intrigues me about these manuals is the issue date of 1942. The British issued another Thompson manual in 1944, which covered the Thompson and the Sten together. Why was the 1944 edition not translated into Italian and issued instead? Maybe the British only gave a post war Italian force Thompsons, and did not want to issue them Stens? Did the British dispose of some lend-lease Thompsons in Italy? Thinking along this line leads me to believe that there is a chance these were translated as "enemy" weapon manuals originally, by translating a captured British manual. These manuals could be reprints of 1945 and 1946, and may have been issued out of convenience of available, previously translated material.

TD looked up "Fascicolo" and it apparently translates as "exercise book." He suggested they could be enemy training aids to understanding American or enemy forces weapons.

I'm sure these manuals will be of interest to someone. Like I have said before, I am a historian, and I want to make as much information available to others as I can. I'm asking folks on the board to respond to this post with any further information that may be known about Italian Thompsons in the interest of expanding my own historical knowledge, and that of everyone else who might be interested on the board.