I recently acquired a couple of French Model of 1921 manuals. They are very similar to the French manual pictured on page 11 of the book that SIG and I printed titled "Thompson Manuals, Catalogs, and Other Paper Items." The pictures printed in the book were from the web, and represent a manual that I have never seen in person, however I have now obtained two 1944 editions of the same manual.

The 1944 manual is an impressive one, containing 87 pages of information, plus 3 colorized foldouts. Many of the diagrams inside the manual are also colorized. Here are several pictures to give a good idea of the quality of production of this manual: 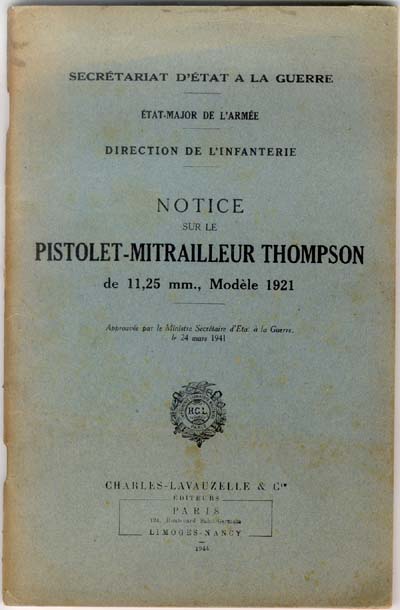 Here are pictures of the 3 foldouts: 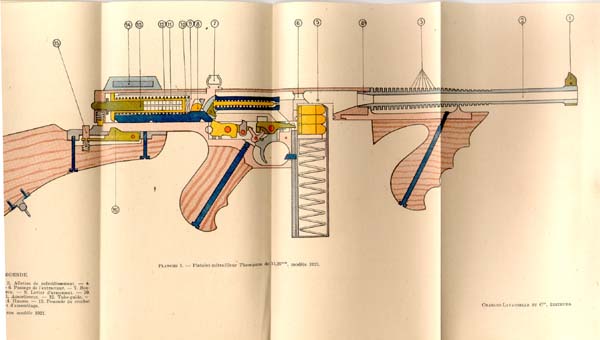 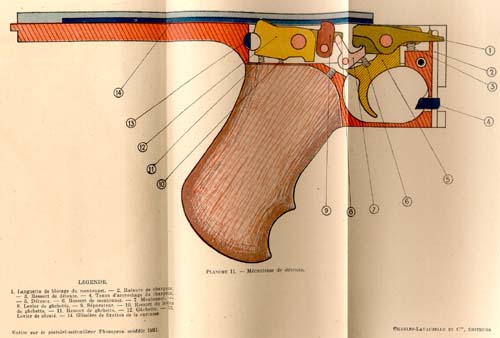 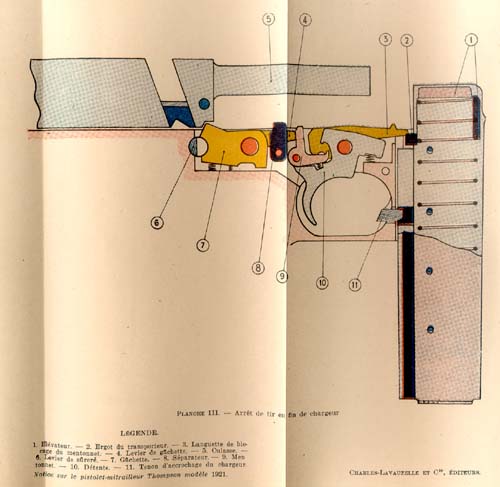 Here are some parts diagrams from inside the manual: 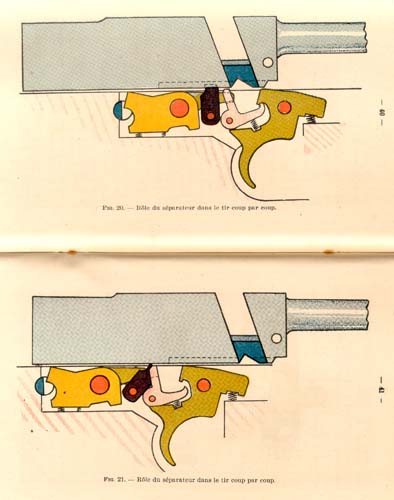 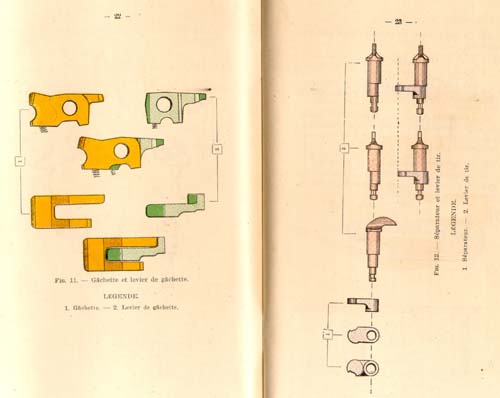 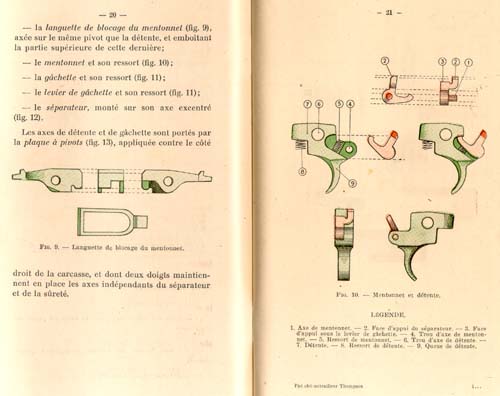 These French manuals represent some fascinating history. They were almost certainly printed to cover operation of the last remaining Model of 1921 Thompsons that Auto-Ordnance had in inventory between 1939-1940, and sold (and delivered) to France. (Approximately 3800 of them.)

What I would like to confirm, and learn more about, is whether these are Vichy Government manuals. I believe they are, and if they are not, then they become even more intriguing based on the print dates and print locations under Nazi occupation. The manuals were printed by Charles Lavauzalle & Co., which had locations in Paris, Limoges, and Nancy in France.

The Vichy French government was what most French considered a traitorous "puppet" government that operated out of Vichy, France, and basically collaborated with the Nazis after the Fall of France in mid 1940. The government was headed by the former Supreme Commander of the French Armed Forces, Henri-Philippe Petain. Several leaders of the Vichy government were sentenced to death by the French government following the defeat of Germany in 1945. Some sentences were carried out, but Petain's was commuted to life inprisonment.

The Thompson manual was printed under the authority of Le Colonel Directeur de l'Infanterie Laffargue. If anyone knows more about Colonel Laffargue, I would be interested in learning what his official capacity was during World War II.

At least 2 different French Model of 1921 Thompson manuals exist, and there are probably 3 versions.

The picture in our book may be the original 1941 version, however the qualityof the image made it impossible to read the print date at the bottom of the front page. The French manuals were issued on March 24, 1941, and have print dates of 1942 and 1944, and more than likely, 1941 also.

If anyone has more information they can supply about these manuals, or the history of French Thompsons, please reply. I'm thinking about writing an article on the subject

Wow!!!...Dave,what a unique piece of literature...those foldouts are really very well done...thanks for sharing your find...

David,
These are my thoughts on the French manuals. My theory for the most part is unsupported, but based on some verified events that happened during the history of the Thompson Submachine Gun. It is well known General Thompson went to Europe in 1921 in an attempt to sell his baby. France was included in this marketing trip but it is unknown (or unpublished) as to what exactly happened during the trip to France. However, something somewhat positive must have happened given the early French Catalog and French Handbook found on page 10 of your book. It was reported in Gordon Herigstadâs book in the section titled EXPORTED THOMPSONS, that France did obtain/purchase five Colt Thompsons that were exported to France on September 21, 1921 and two more that were exported to France on August 5, 1925. Gordon further reported that at least one of these Colt Thompsons were obtained for testing purposes by or on behalf of the French government. To quote Gordon, âS/N 3075, a prototype tested by the âEtablissement Technique de Versaillesâ in 1922.â This prototype is what Gordon describes as the 1922 Thompson Military Model. If what Gordon reports is true, then it is entirely plausible that the French government also tested the standard Model of 1921 Thompson. This theory is supported in Tracie Hillâs book on the section titled, âThe Thompson is Made in England.â On page 94, Tracie reprinted the text of a letter dated January 6, 1927 regarding the French test of a Birmingham Small Arms (BSA) Model of 1926 Thompson. In the text of the letter is the following statement, âThis weapon has the same operating principle as those already submitted in 1921 and 1924, which had been studied earlier (italics mine).â The only Thompson that could have been âstudied earlierâ in France in 1921 was a Model of 1921 Colt Thompson. I believe it is entirely possible the testing process resulted in the creation of some paper exhibits or documents as a part of this testing process that would be included in any final report on the results of the French test. I do not have any reason to believe a manual or handbook was created, however, I do believe it is quite possible most of material contained in the manuals you now own may have been created as a result of these tests. Now that I am out on a limb, I will take it a step further. Why would the French publish all these previously created documents into a manual on the 1921 Thompson â when the 1921 Thompson was not used in any great numbers during WWII in France or elsewhere? Because the documents were available! France was in a mess during the time frame (1941 or 1942) when the first manual was published. The Thompson Submachine Gun was in use by the French (or steps were underway to purchase Thompsons for the French and put it in use) and it was just easier and more importantly, faster, to publish something off the shelf that would work in training soldiers and partisans on how to use this American Submachine gun. In reality, how much difference is there between a Model of 1921 and Model of 1928 Colt Thompson Submachine Gunâ¦or US Model of 1928A1? In a time of war, speed is of the essence.

All comments are welcome!

I didn't notice the "funnel" in the large foldout until you mentioned it. Any Thompson reflective of this characteristic would likely leave a mark on its owner...

I followed along with your hypothesis until this point:

"France was in a mess during the time frame (1941 or 1942) when the first manual was published. The Thompson Submachine Gun was in use by the French (or steps were underway to purchase Thompsons for the French and put it in use) and it was just easier and more importantly, faster, to publish something off the shelf that would work in training soldiers and partisans on how to use this American Submachine gun. "

I think 1941 or 1942 would have been beyond the time that steps were underway to purchase Thompsons for the French, since they had surrendered. I don't know how many French forces existed outside the country, and I don't think the manual was published for Partisans. I believe it is a Vichy government manual, and this may go along with your theory about existing literature from the earlier tests, especially if the Model 1921 guns that were sent to France were in use by the Vichy government. I also think that French forces outside of France who might have been issued a Thompson for invasion would have been given a copy of FM 23-40 in French, such as the one pictured below. 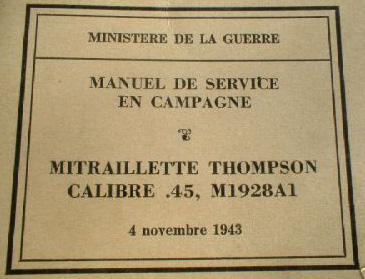 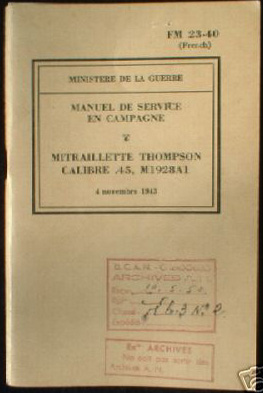 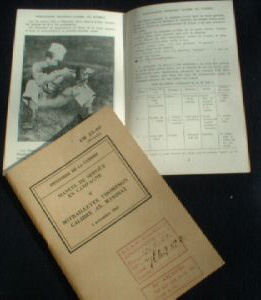 Your thoughts on the early 1920's French connection to these manuals is very intriguing, and convincing. Thanks for posting your response! I think we will find out more about these manuals with a little bit more research.

Awesome find! Thanks for sharing it with us.

I'd be interested in a set of color copies should to decide to go for it.