I have 3 different Thompson prints that I am offering for sale, produced from originals that I own. You have probably seen 2 of them, as I have posted the 1919 print for sale before, and most folks have seen the World War II War Bonds "Back the Attack" print. If you were at the TCA Show in August, you might have seen the other one. These prints would each look great in your gun room, or as reference pieces.

I purchased a very interesting paper item a few months back that probably dates from the war era or earlier. It was hand colorized with brown, grey, black, and yellow ink. The print may have provenance to George Goll, but I am not fully certain of its exact heritage, except that it was probably hanging in a frame at the AO Bridgeport Plant. The original appears to be a faint positive image from a blueprint on photo paper that was traced in ink and colorized. It arrived in a very old oak frame that utilized framing methods and hanging hardware of yesteryear. It documents Model 1919 Thompson serial number "No." That particular weapon, which is featured In Tracie Hill's book, has a 1921 style actuator and a front sight, unlike other 1919's.

I had a number of color copies printed on card stock. They are slightly enlarged, and printed on 11" x17" paper with a small white border edge around the image. They came out very nice!

Here is a picture of the 11" x 17" print I am offering for sale. (Please excuse the flash reflection.) The prints look really great, and the printing reduced some of the wrinkles that are obvious when viewing the original, since it was pressed on glass for the copies to be made.

Print #2: Tommy Guns At The Front

I decided to make prints of this poster because I believe only 2 of the originals exist today. I purchased both of them, and sold one to a prominent collector. I kept the one with a hand written notation on the bottom, and that is the one I used to produce the prints for sale. The 2 originals were found on the site of former print shop that did some work for Auto-Ordnance during World War II. This appears to have been an internal Auto-Ordnance motivational poster, and it features a censored letter from a soldier overseas during the war who was raving about his Thompson. Take a look at the story on the print, and you'll get the idea. The handwriting on the bottom of the print depicts a sad epitaph..."D.V. thinks this boy was killed back in the States in an air crash. I also think he was Ed Slawson's boy. D.V." 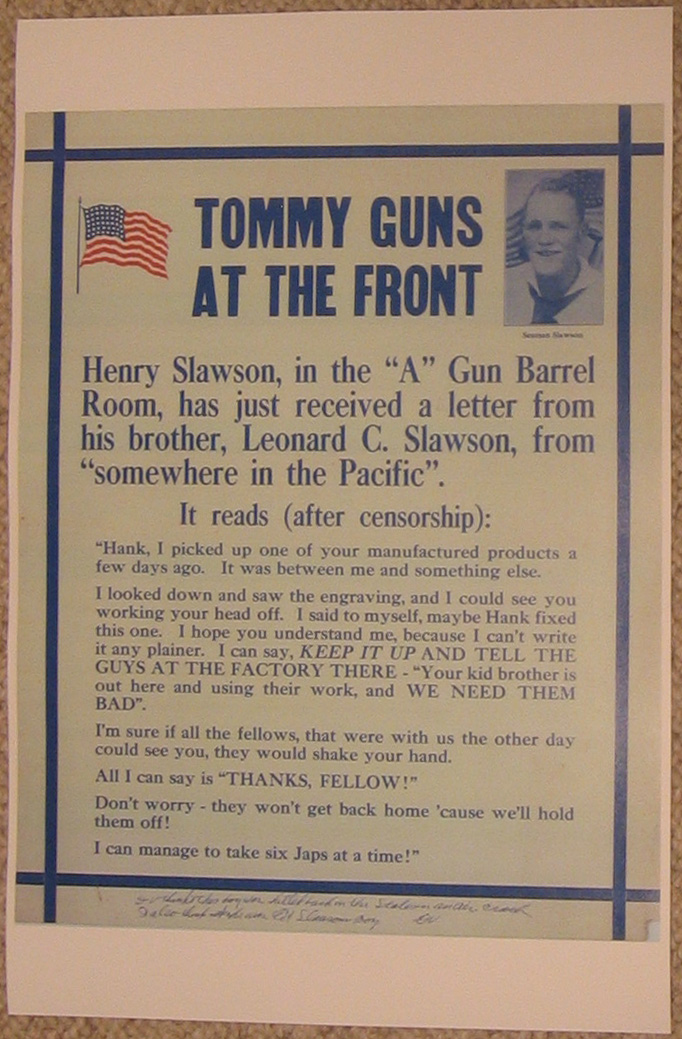 This print does not take much explanation. It's a copy of my favorite WWII USGPO poster, featuring a TSMG toting paratrooper. The original posters were printed in various sizes during the war, and this one was produced from my 20" x 28" original.

The "Back The Attack" prints measure 12" x 18", and are printed on card stock paper. There is a small white border around the image, as can be seen in the picture. These turned out really well, with vibrant color like the original. 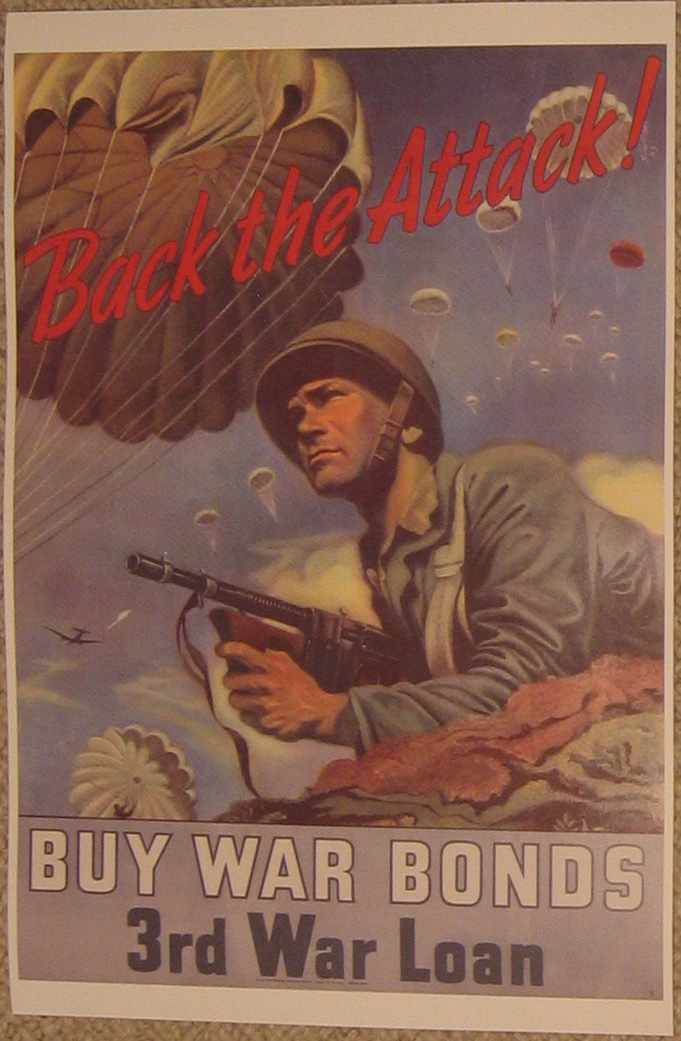 I want to make each of these prints available to interested collectors at reasonable prices.

Prices are as follows:

$12 shipped first class mail in a tube. (Domestic mail only)

$10 each (You save me the cost of the tube, and some postage, so additional posters shipped in the same tube receive this discount.)

I accept PayPal, money orders, and personal checks. Texas residents must add 8.25% sales tax. Just e-mail me at the address listed below if you are interested.

Regarding the "Tommy Guns at the Front" poster, I received word that at least 2 other originals exist. The original posters were used in the Savage plant in Utica, NY, and the print shop where mine were found was also located in that city. From what I was told, Leonard Slawson was killed in a car accident in 1945. This information was received from a relative of Leonard Slawson, who sold the other 2 posters to the collector who contacted me.