Here the URL for the story, but Iâm trying to find the video with the Thompson on the table.

I seen the video run today around 11:00AM EST, but canât find it on the internet. From the 2 seconds the camera was on the Thompson, it looked like a 28, but I wasnât sure if it was a full auto or or a semi.

I just screamed when I show the Tommy gun on the Sheriffâs table with all the other guns. I can just see it now â¦ âoh, hereâs a 28 Thompson, can I have my $100 dollar gift card?â â¦..

Can someone come up with the video and post it here?

I hate gun buy back programs... What a farce.

My favorite quote from the article:

That's like here in Indy, some bonehead is robbing fast food chains with a TEC-9. Every freakin' tv station is calling it a machinegun. Even heard a semi auto machinegun the other day! WTF! I've emailed the reporters a couple times but no response back.

Send them a dictionary and underline the word "machinegun."

This is Compton we're talking about. I doubt that any of those guns were bought at retail by the people turning them in for the $100. With the exception of the home-made pistol, all of those guns were likely stolen at some time. It's probable that the Thompson was a registered NFA item that was stolen. What the police should be doing is jailing all the thiefs who stole those guns, and then returning the guns to their rightful owners. That is, if the serial numbers haven't been obliterated. What a racket; steal a gun and fence it to the cops. "I got myself a plasma TV and I bought it with my own money." ('Course, I stole some guns to get the money.) It's sad, but everything in Compton is a candidate for theft.

I could probably make up a 4 or 5 guns that would be quite profitable to turn in for 100 bucks.... I know a guy who drug a working Maxim down to the 50 buck food coupon turn in here.... He got it from buying an estate and thought it was a cool thing to have until someone told him the feds 10/10 plan.... They took it from him no questions ask.... It must a looked kinda funny draggin that thing out next to all the evil semiauto machine gun pistols...... Anyhow I tried to explain what I just paid for a kit but he was happy with his free meal......

The guy could have at least taken the wood off of it!

Just think how much the parts could have gone for!

My pet peeve is the number of sawed-off shotguns they take off the gangbangers in the DC area, and there's never any Federal prosecution of it. We wouldn't want any of these future "Rhodes Scholars" to do any hard time for that. No, it seems easier to scam somebody like a Randy Weaver, (somebody who has something to lose) into doing things like that.
Charges for Sawed-offs are usually just ignored and the scuzzies are out in 18 months for illegal possession, if they do any time at all, or some other pansy sentence like that.
You or me try that, and they're all over us like a dog on a pork chop!
The BATFE should put these people away, the same way they'd get all over us for not filing a 20.20 or some other completely innocent oversight.

Mark is right, most of those guns were probably stolen. Do you think the police will try to find the original owners of those guns...haaaa! What about that '21 Thompson, where... and how on earth did that thing get turned in? Will they call ATF to find if it's registered and if so to whom? Certainly not to the person who turned it in. That too was probably stolen property. These "buybacks" by police do abosulutely nothing in the way of affecting crime in any way, nothing! They are wasting taxpayers money, it's done just for appearances to try look like they are doing something about crime.

I am in the area and was born in Washington DC. Far and above, 95%+ crimes commited in the DC area are with illegally obtained handguns - generally stolen/blackmarketed from MD or VA. I don't hear much about illegal SBS's. I see the unfortunate voilence on the nightly news every night. You really feel for when some innocent person passing through is robbed and murdered for a car or a few bucks.

More proof that the District's handgun bans are ineffective and useless.

Everyone of you are right on the money on this crap.

About ten years ago, I started placing a sign on my gun show tables that said:

"When my town council gave me $50 for my Saturday Night Special, I used the money to make a downpayment on an ASSAULT RIFLE."

There was also a real case, I believe in NJ, where some punks were outside the municipal building where the buyback was being held, and they paid a guy $50 BEFORE he entered the building, then they went and murdered an old man on the street with their new purchase. If the town hadn't set up the buyback program, the old man would still be alive today.

And as for the media, do you remember when Purdey shot the kids in California with a semi AK and the media started the whole assault rifle fiasco?

Well CNN ran a segment showing a sheriff's deputy firing a FULL AUTO ak at a watermelon. The camera showed the AK firing, then it cut to the water melon bursting. Only trouble was there was combat forensic doctor watching the CNN tape who knew the watermelon wouldn't have burst like it did with ball ammo. He had no political leanings either pro-gun or anti-gun, but he knew "something was wrong with this picture." He tracked down the film crew and asked them about the footage of the watermelon vs AK. They said: "Oh yeah, that was a real problem. The bullets just went through the melon with no dramatic effect. So the film crew got a deputy to fire his 9mm Beretta with hollow points to blow up the water melon. But the film footage still showed the AK at one end and the melon at the other end, and never told the public that they had to secretly have a deputy fire a handgun to make the melon explode!

Okay, I have an idea â¦

I live in Ohio, where you donât have to do any paperwork to transfer a weapon between two people that live in Ohio. What if I started my own âGift Card for Thompson Gunâ campaign?

PhilOhio, you live in this wonderful state and Iâm sure youâd give a $100 for a Colt Thompson

So, if anybody on this board has a Thompson and would like to trade it for a $100 gift card, drop me an e-mail

Here's an idea. Find out where and when the next buyback will be and get there early. Have a great big wad of cash and buy all the good ones for cheap before the 'owners' get to the table. Send the ugly, ratty ones down the line to the cops. In my eyes, everybody is a winner.

I've seen guys do that at my local gunshow. They hang around the front door and inquire on all the guns going into the show. I bet they get some good ones that way. Now for those of you who feel ethically challenged by hanging around the entrance of a gun show...volunteer to work the guncheck table that every show must have and while you are tiestrapping every firearm passing thru the door...take your pick!!...

The man has one of the largest foreheads I have ever seen. Seriously, I could probably hold up a L-drum over that noggin and still see skin. 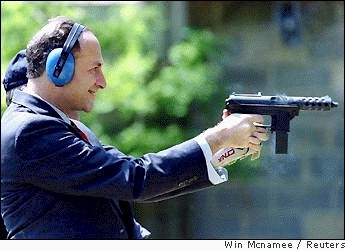 And look at the ratty smile on his face while he's shooting it! Head leaning forward. Looks like a pyscho shooter to me!