Mystery Barrel For A Thompson

I know we touched on this a little last month after seeing the ebay auction, but here is the mate to that barrel (it was in the wrap).

Measures exactly 15 inches in total length. The thickness at the breech end is just a few thousanths over the barrel on my semi auto, and with the "flats" of the "nut" measure 1.012 inches and the points measure 1.15 inches so it could not have had the "nut" machined into a standard semi barrel.

Threads at each end are standard threads for barrel and compensator. Muzzle end still has some sort of fiber type washer on it.

The other interesting thing was when I unwrapped it, there was a hacksaw blade packaged with it.

So, anybody care to venture a guess as to this barrel heritage? I"m guessing a numrich creation but what purpose? No markings of any kind and it appears unfired. There is a shallow scratch in a spiral where the end of a forend hanger would have hit so it was at least mounted on a receiver once.

It appears to be a variant of the standard UD42 BBL.

Remember, Marlin made a very few UD's in .45ACP. Except for the length shown here, the BBL pictured would be entirely correct for a .45 caliber UD, and the muzzle threads shown are correct. It is known the .45 caliber versions had a longer BBL (than the 9mm variant), but the exact length has always been in dispute and no surviving records exist, to my knowledge. I have two pictures of the .45 variants, one shows a muzzle comp similar to the Cutts, so this may be from that variant.

One thing for sure, it does not resemble anything made post-war that I am aware of. The rear wrench flats are an absolute Marlin UD-42 I.D. feature.

.45 acp for sure, stuck a round in the chamber to be sure.

Breech threads are the same for the marlin as a thompson?

I found one picture for a marlin UD-42 at this site. Looks like is uses a thompson type magazine. I also just read Franks book on submachine guns and there appear to be similarities the countour of the barrel is different than pictured, though if this is an elusive .45 barrel, probably explain the differences.

"..... the countour of the barrel is different than pictured"


Actually, the contour is the same, it is correct. What you are seeing and thinking different is the grip mount flanges for the vertical grip frame which go over the smooth BBL.

Early High Standard factory-released images clearly show some UD's of both calibers were mgr'd with muzzle devices, though the plain BBL versions were undoubtably the norm, as no known (Marlin mfgr'd) UD-42 photgraphed in foreign or OSS service is pictured with anything but the plain BBL.

The UD magazine (in 9mm) was a virtual clone of the TSMG, scaled down. It remains a disputable issue today, but has always been presumed the .45ACP UD's used common TSMG mags, as there was a precendent for that in the Marlin/Hyde M2, both guns facing the same inquiry Boards at the same time.

I've had some UD-42 manuals for the weapons built by High Standard in the past, and they list barrel lengths for both 9mm and .45. as 11". The barrel looks different to me, but I don't know if all UD-42 barrels were the same. Here is a scan of the inside of one of the High Standard UD-42 manuals: 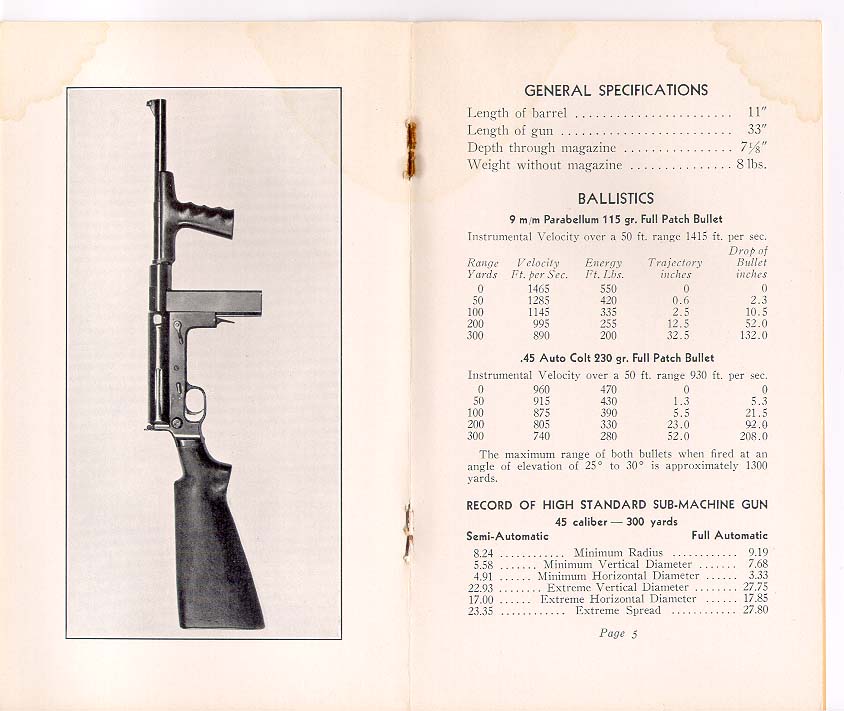 I was refering to the barrel contours in Franks book "United States Submachine Guns" and the pictured UD-42's don't have the narrowness towards the muzzle that my barrel shows. One shows barrel wrench flats, the other two do not. Dalberts picture also shows narrow barrel wrench flats.

What are the threads on the muzzle end? They look much larger than the Thompson threads.

Theads are the same size/length as on a thompson compensator.

I don't think the barrel came from a UD-42. I'm just going to throw this out there, but is it possible it came from a destroyed T2 Thompson?

It's too short for a 1923 and the muzzle and breech ends are different. It seems too long for a T2. Now that at least two of these barrels, no doubt there are more, has surfaced, it pretty much negates them being from experimental and prototype TSMG's. The clue is in the wrenching nut on the breech end. Whatever purpose this barrel had it was required to be put on and taken off without special tools. That seems to imply a customized job of either an existing 1927 A-1 barrel or one made by Trast for testing different lengths of barrels on the 1927 A-1.

It was suggested by Merle that this might be a movie quick change barrel.