I just got a batch of new-used mags in the mail today. They're overall in pretty good condition. But, 4 out of the 5 I bought are stamped with a big "V" at the bottom on the front. All of the mags with the "V" have their bolt hold open tab broke off. They're all 30rd Seymour mags. 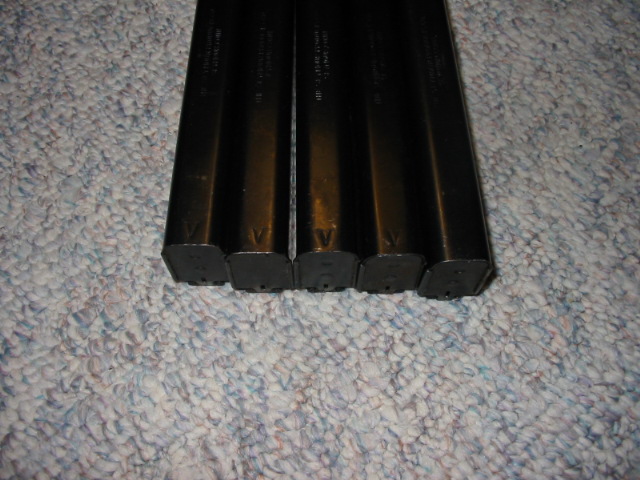 I have a couple of the mags with the "V" in it. I was told they are a "V" for Victory. These were stamped on them right at the end and right after WWII. I may be wrong but that is what I heard.

Anyone got any therorys why anyone would remove the bolt hold open feature of a TSMG mag? you drop the empty insert a full one and start shooting no need to release the bolt by hitting a catch or pull a cocking handle or any other means. No one said anything about the witness holes being closed up so I doubt they were trying to keep sand out by closing the bolt after last round.

My assumption was they're used in Europe. The Euros don't believe in locking the bolt back on their semis, I reckon they didn't like it on their TSMGs either. I can't think of what the V might have stood for, but it's also possibly a Roman 5.

If the tab that lifts the trip is broken off, the bolt will not close on the empty chamber. It will impact the back of the follower and stop. If repeated not to many times, the follower and/or the bolt can be damaged. It can prove difficult to remove a magazine when the bolt is pressing against the follower as described.

I agree that if this was done intentionally that it is most likely an adaptation to another gun- but which? The âVâ marking is perhaps an identifier of this modification? I doubt that in celebration ordnance workers were directed to stamp âvictory marksâ into magazines.

It is interesting to note that the two styles shown above have different positions of the âVâ; top and bottom of the magazine body. Those stamped in the bottom part would require disassembly but the upper marking could be accomplished by simply depressing the follower while inserting a mandrel to back up the stamp.

I have one just like Bill in Va has. Same make and model. "V" is on the top, not the bottom.

I still don't know what the V is for, but it apparently dates from 1941 or earlier. The picture Tracie has of one of the prototype 30-round mags has the V on the bottom front (see TCN #133 from Nov. 15, 2001). The prototype was made by welding parts of two 20-round mags together (Crosbys in his picture). I doubt that the V would have been added after the fact, though I haven't had a chance to ask Tracie about the lineage of this particular mag.

Just another mystery of the Thompson.....