help from anyone who has seen or owns a lanchester

looking at one with help of a forum member. its a C&R. Does not appear to be a dewat. I clearly see  welds on the back of the tube(inside) on the bottom 1/2...im wondering if this is normal? and how the lower metal piece under the tube is attached?..you can see a pattern to the welds which makes me think its the design. I just want to be sure its normal and this isnt cut tube/re manufactured gun. Maker is listed as Lanchester. Advice from a major gun smith is its a reweld, but i dont see the weld on the top 1/2 of the tube. 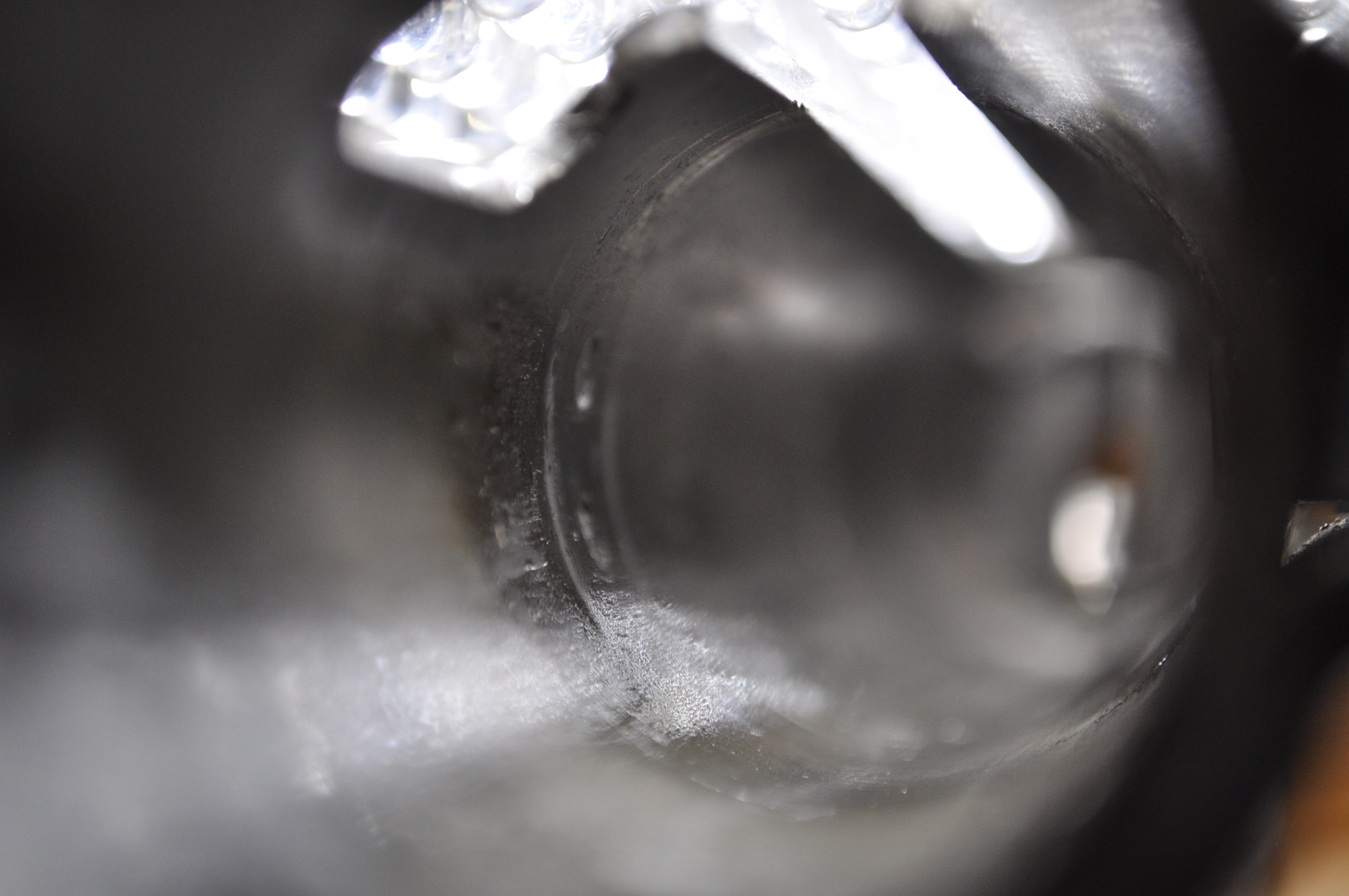 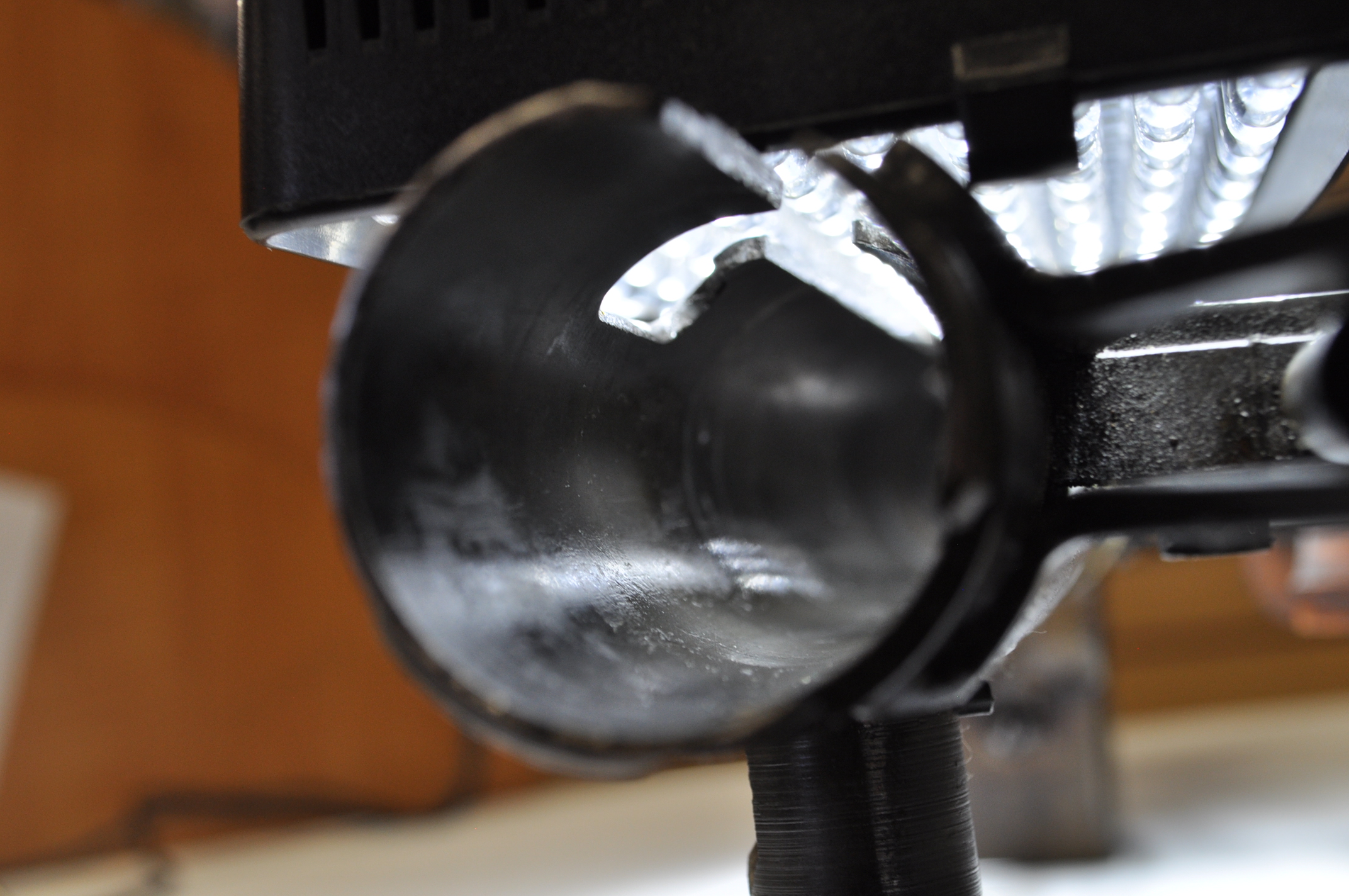 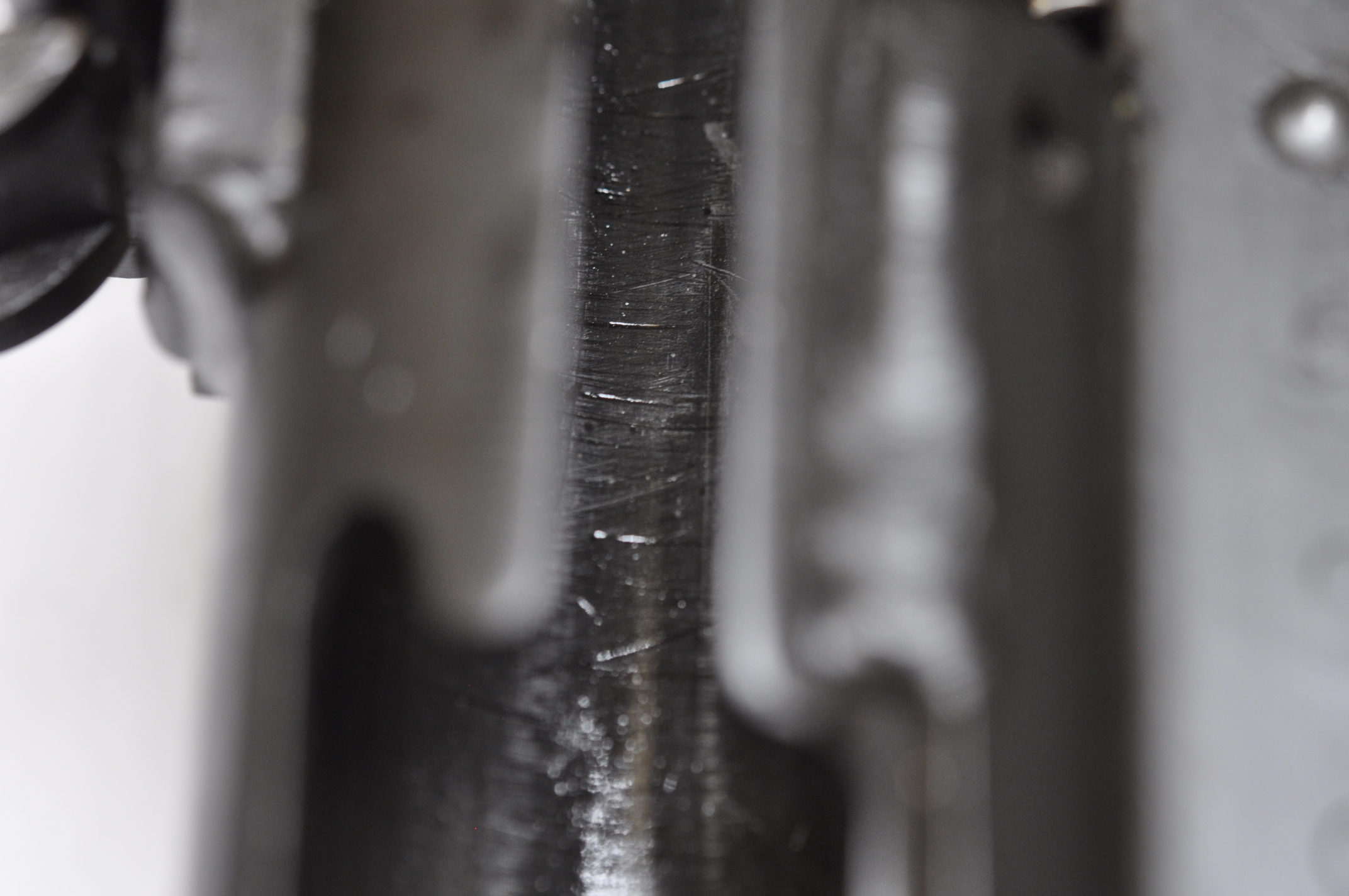 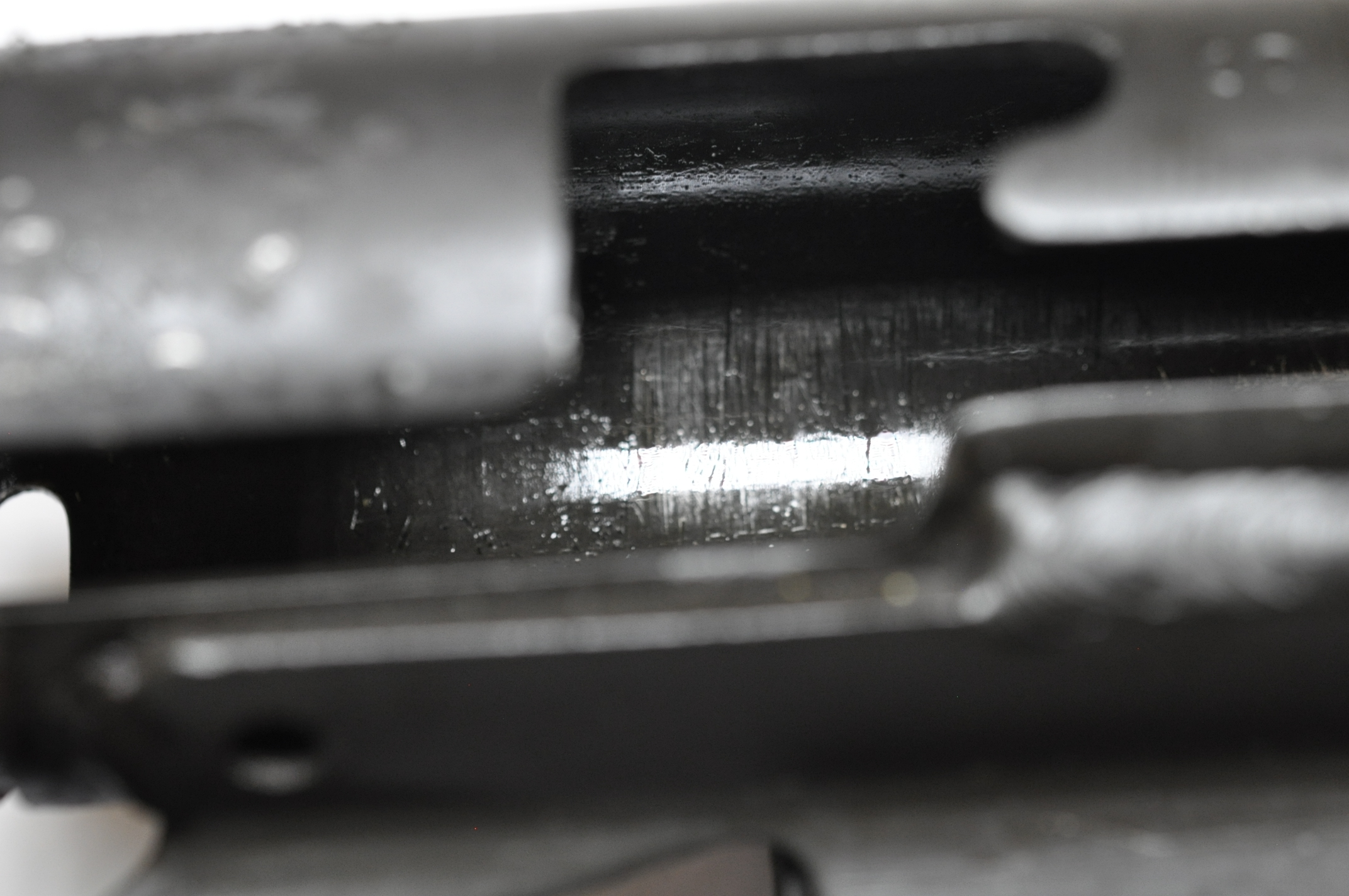 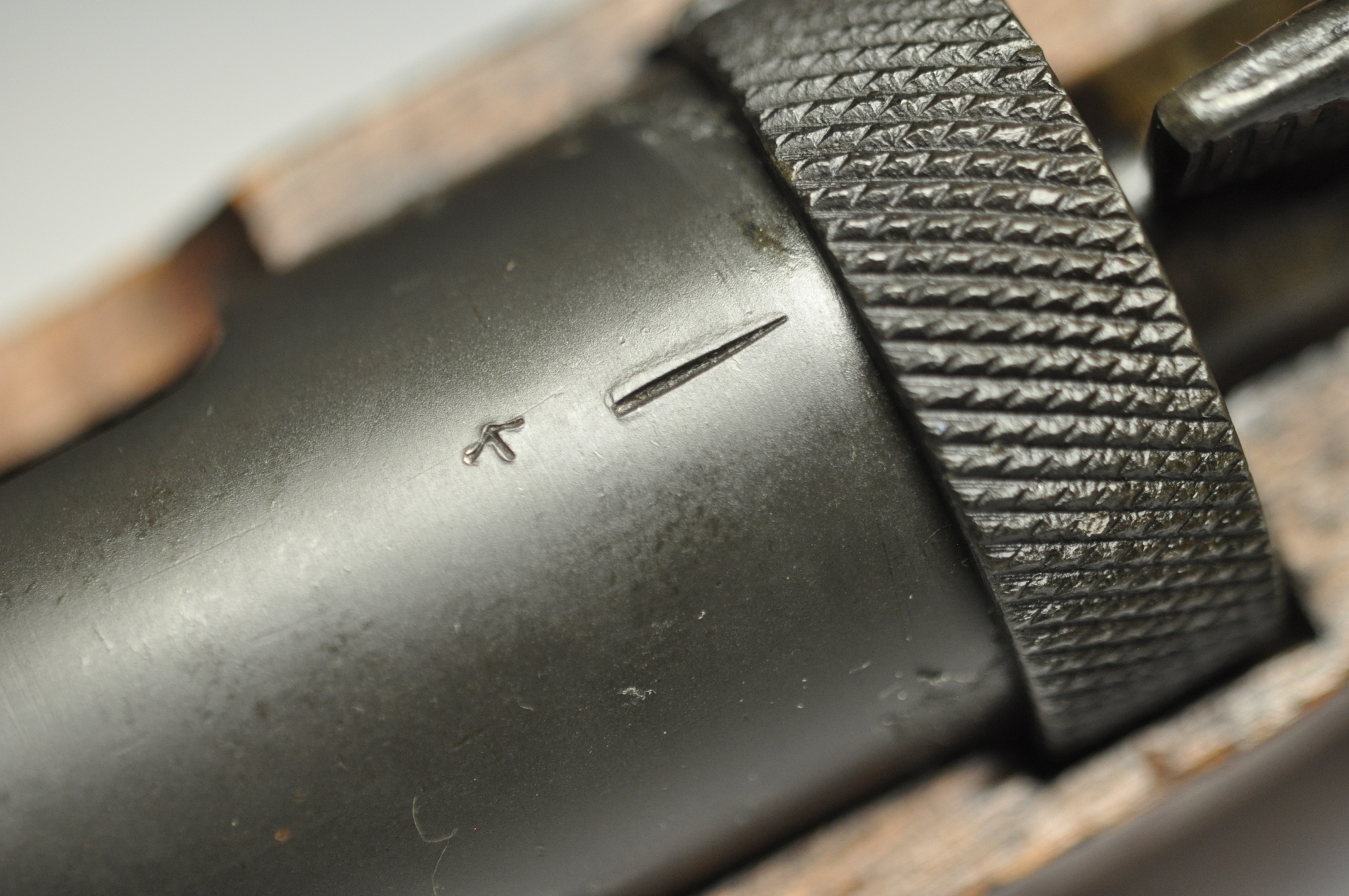 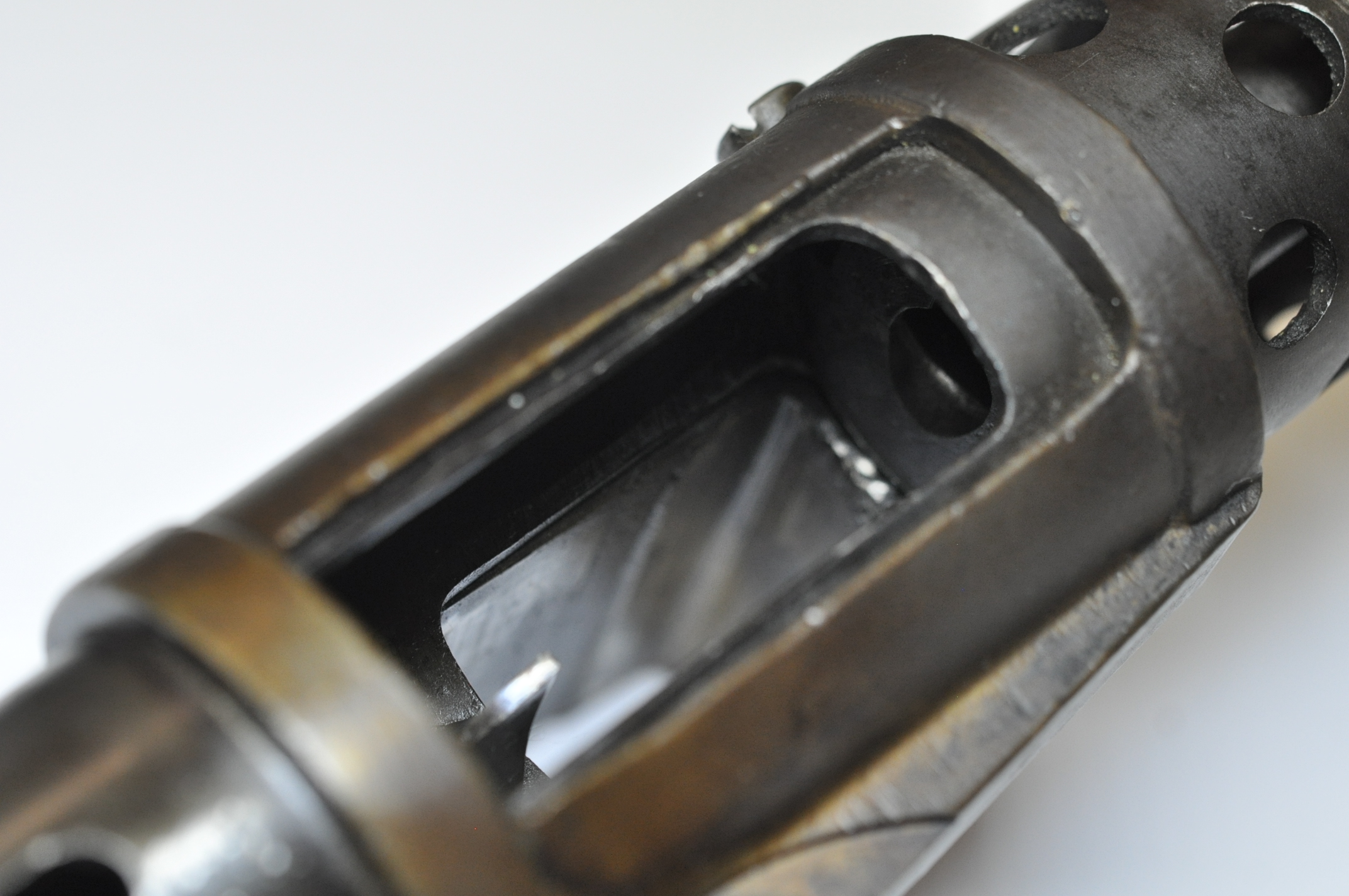 I’ve had a number of Lanchesters over the years, brokered and worked on some. Could very well be the seam of the tubing when manufactured to spec where two sections were electric induction butt welded, much like electric spot welding, to make a continuos piece of tubing. Such techniques save waste and help to utilize close to 100% of raw materials.
It is not “normal” but another one of the multitude of anomalies in prodcution manufacture of any product.
You can ask the current registrant to call ATF/NFA, explain that he wants to transfer the MG as C+R and see if they will divulge to him the date of original registration. Sometimes ATF will do this for the registrant without a letter.
If the registrant can’t verify that it is original, and the anomaly bothers you, don’t buy the gun. FWIW

if its 68 or before registered you would assume its not a reweld correct?

i was thinking of that also. pre 68 why wouldnt you get a dewat for $50

when did people start doing rewelds


Thanks for your opinion bob. I was hoping youd respond

There are a number of Browning .30s, watercooled, that were rebuilt pre-‘68 by an army arsenal in NM or CO, Pueblo Arsenal if I recall, and they were rebuilt with new sideplates, given new serial numbers, thpical hand stamped RIA IDs and registered. There are some others that I have heard of but I owned one of the Pueblo guns back in the 1970s. There was no such animal as a “controlled part”, welded or remanufactured receiver prior to the GCA ‘68. It took ATF a number of years after GCA to decide how to handle the import of live MGs, the resolution of unregistered MGs and other issues that were not addressed by the GCA. The big unaddressed issue was the manufacture and registration of MGs for private possession by both licensed manufacturers and individuals, which was still legal and in the federal regs. Interested gunsmiths, dealers, collectors, importers, etc who wanted to have live MGs for collecting, shootng, sales, etc approached ATF for guidance about how to proceed under the still current manufactruing and registratiin regs. The evolution of cut and welded receivers developed slowly once ATF decided that a sideplate or a tube was the controlled part or “firearm” and consequently, legally the MG, since they decided that import of live MGs was ok if the receivers were destroyed first, rendering the MG a “non-firearm” and no longsr under the control of ATF. If the receivers were destroyed then, in the case of a sideplate gun like a BMG or Maxim, the sideplate with the serial number was the controlled part which could then be cut in half, rebuilt or duplicated and registered as a “new” firearm. This is the short version of events.
There are a number of eligible suspects who might be identified as one of the first to reweld a tube or plate, but I don’t know who exactly. Doug Offinger (DLO) was instrumental in engaging ATF about how to deal with live, imported MGs as he had quite a few 1917 WC BMG and needed help. DEWATs, registered and unregisreed, were a good source of MGs to reactivate and rebuild to register, and there were multitudes of unregistered MGs available.
All for now.

i not positive, but i think it was mentioned the owner had a history on the gun...so maybe we will have the first form 4 as proof.

possibly an arsenal refinish? looks black oxide to me or close to an original finish. i believe too nice to be original. another known gun smith has pointed out a wave on the cocking slow around the suspect weld area. I cant see it. 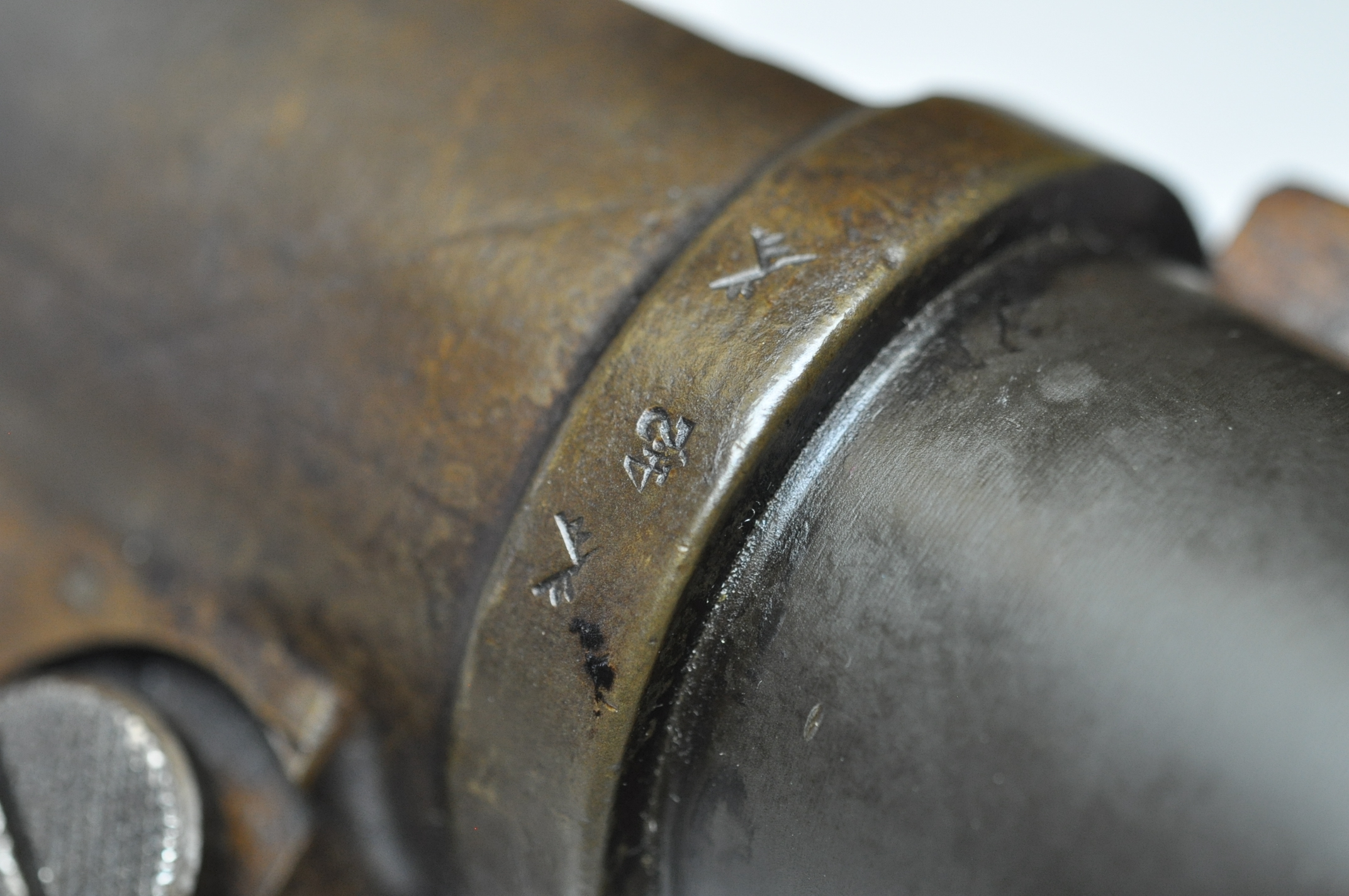 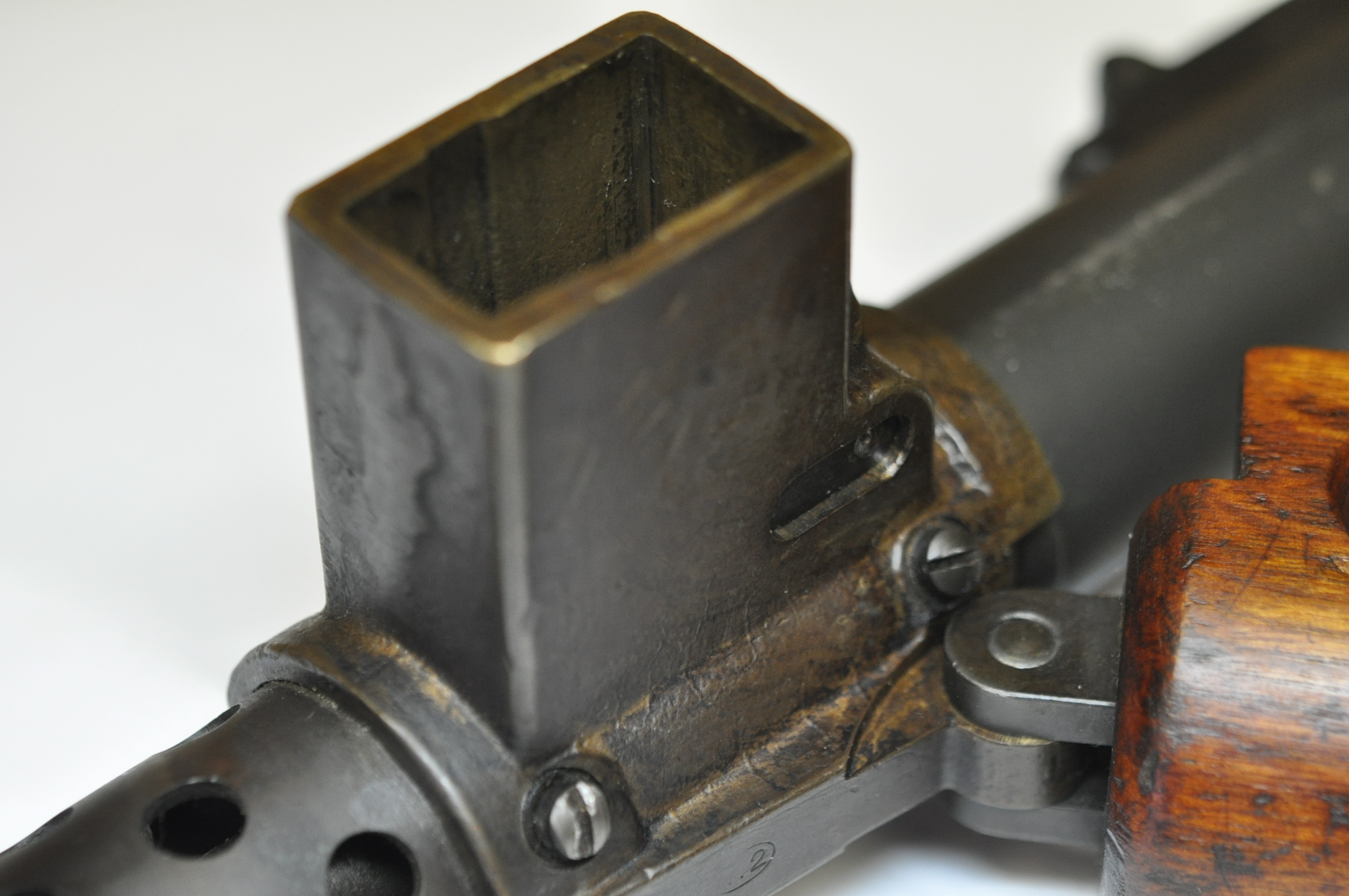 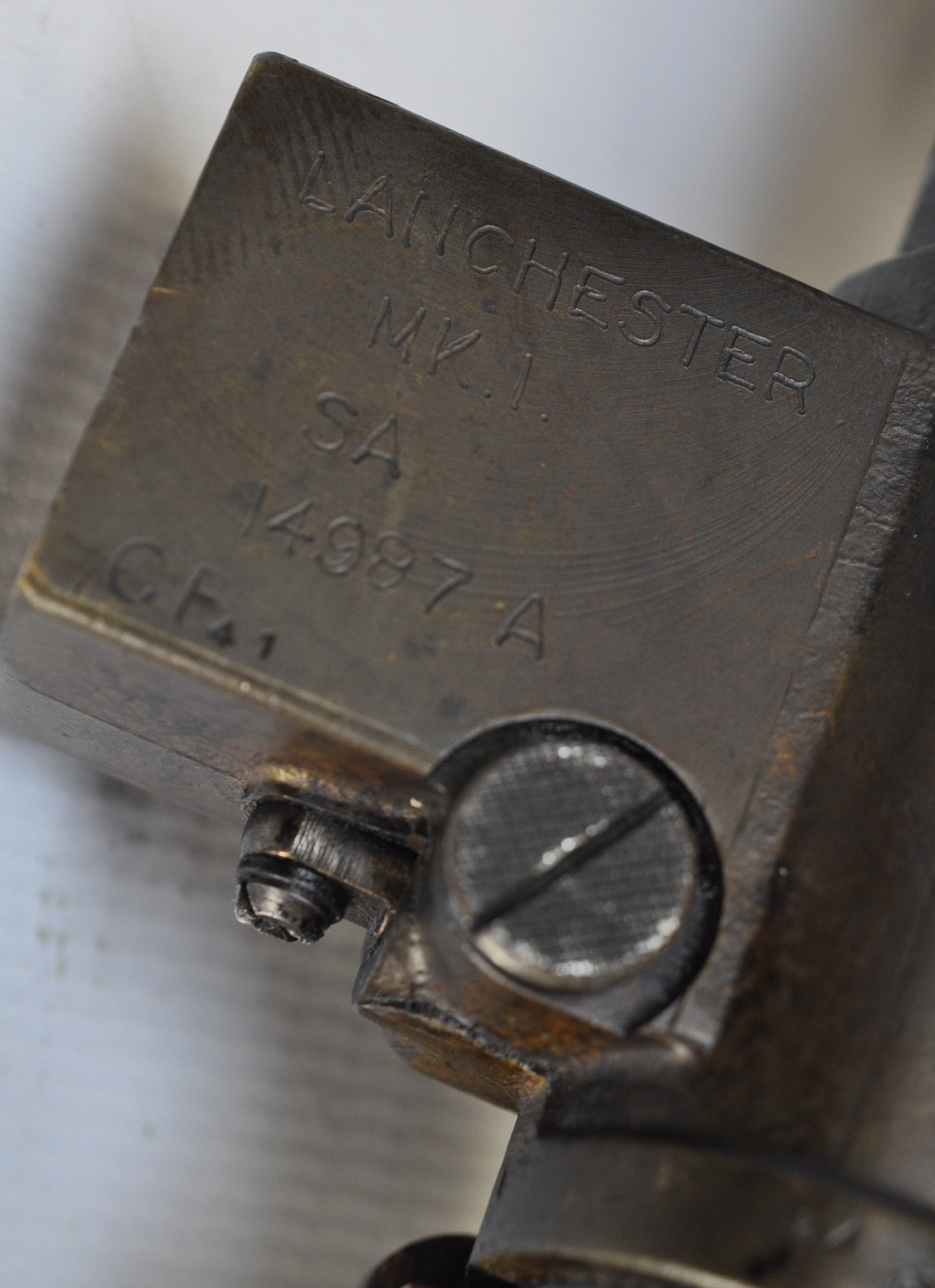 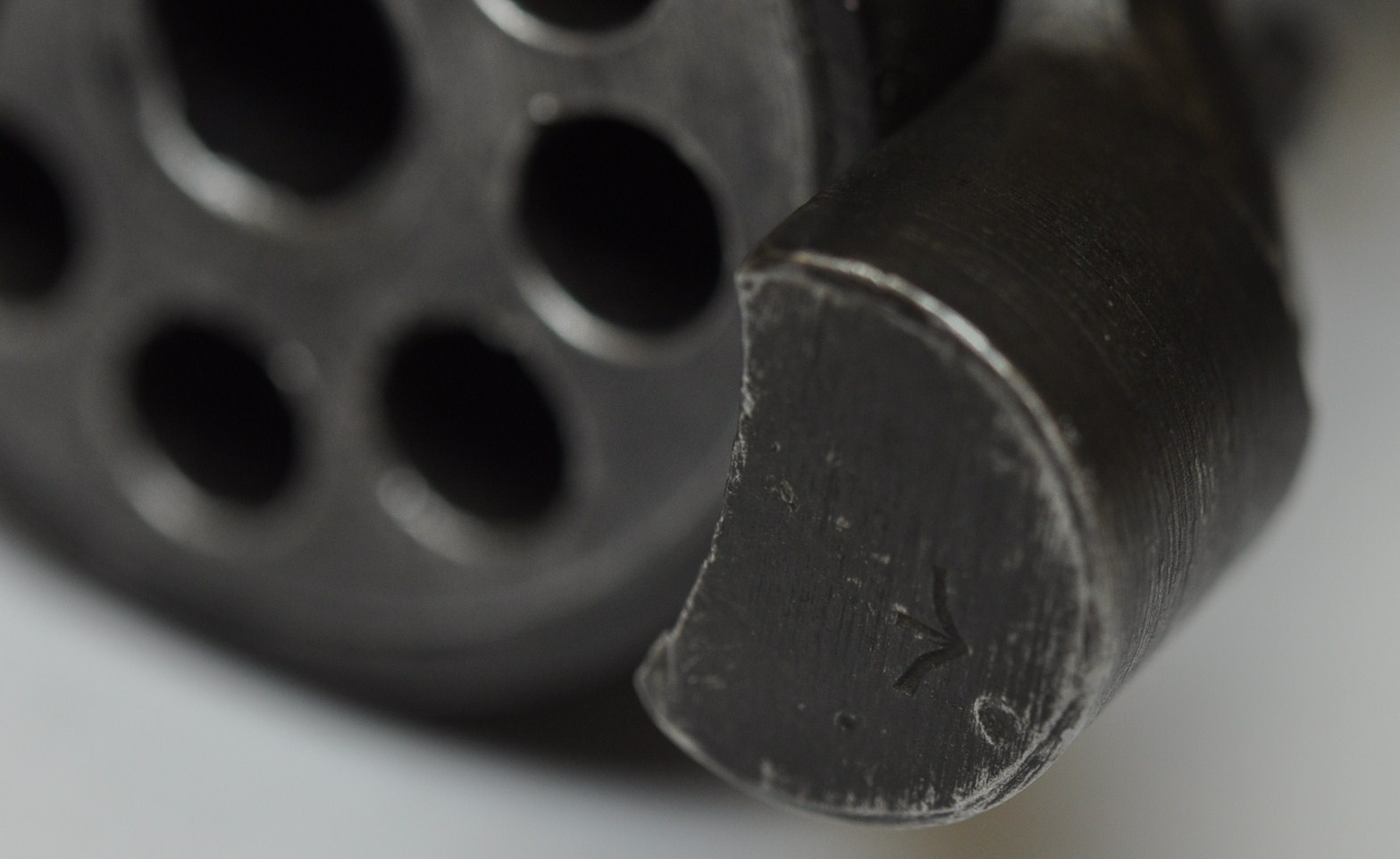 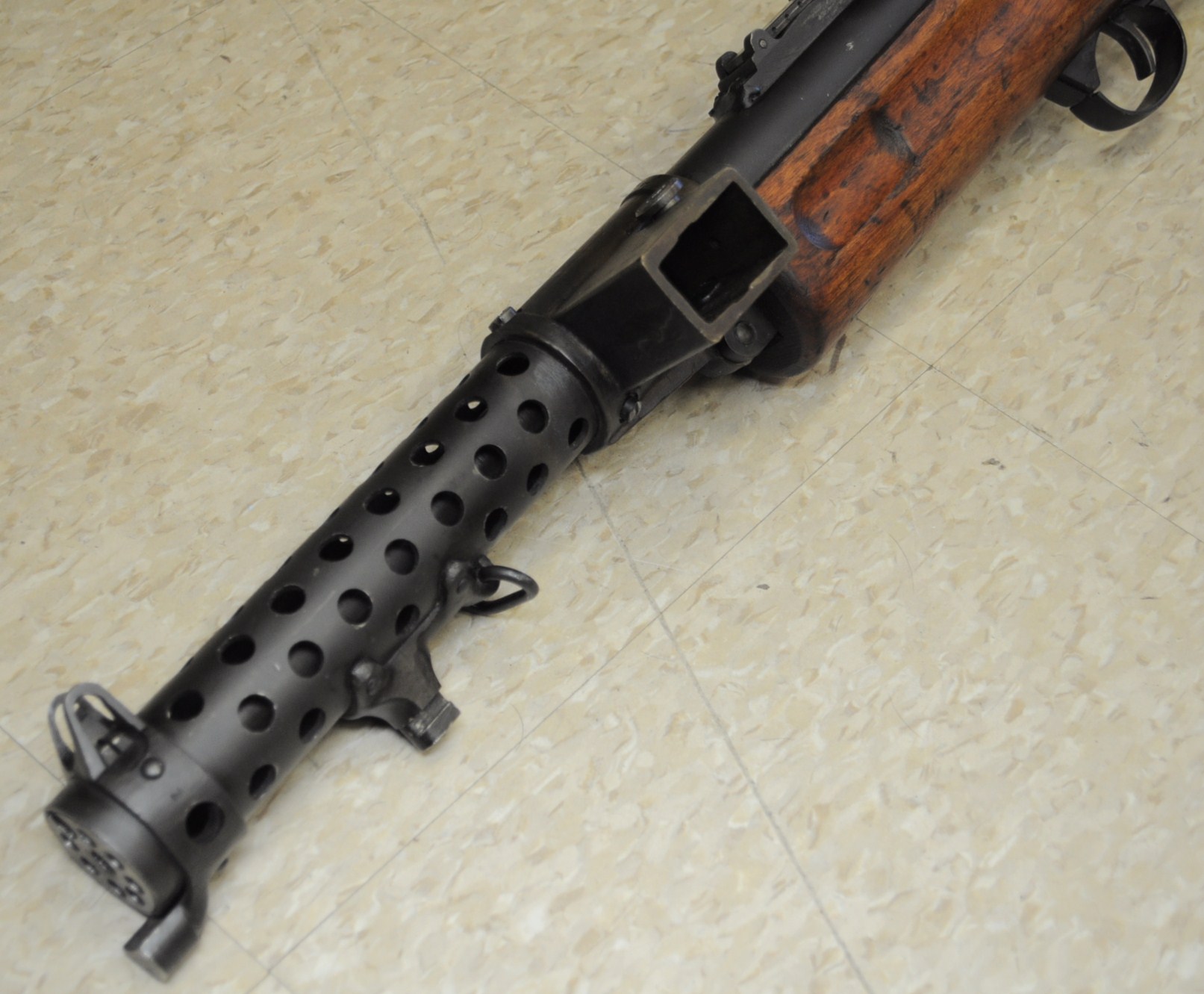 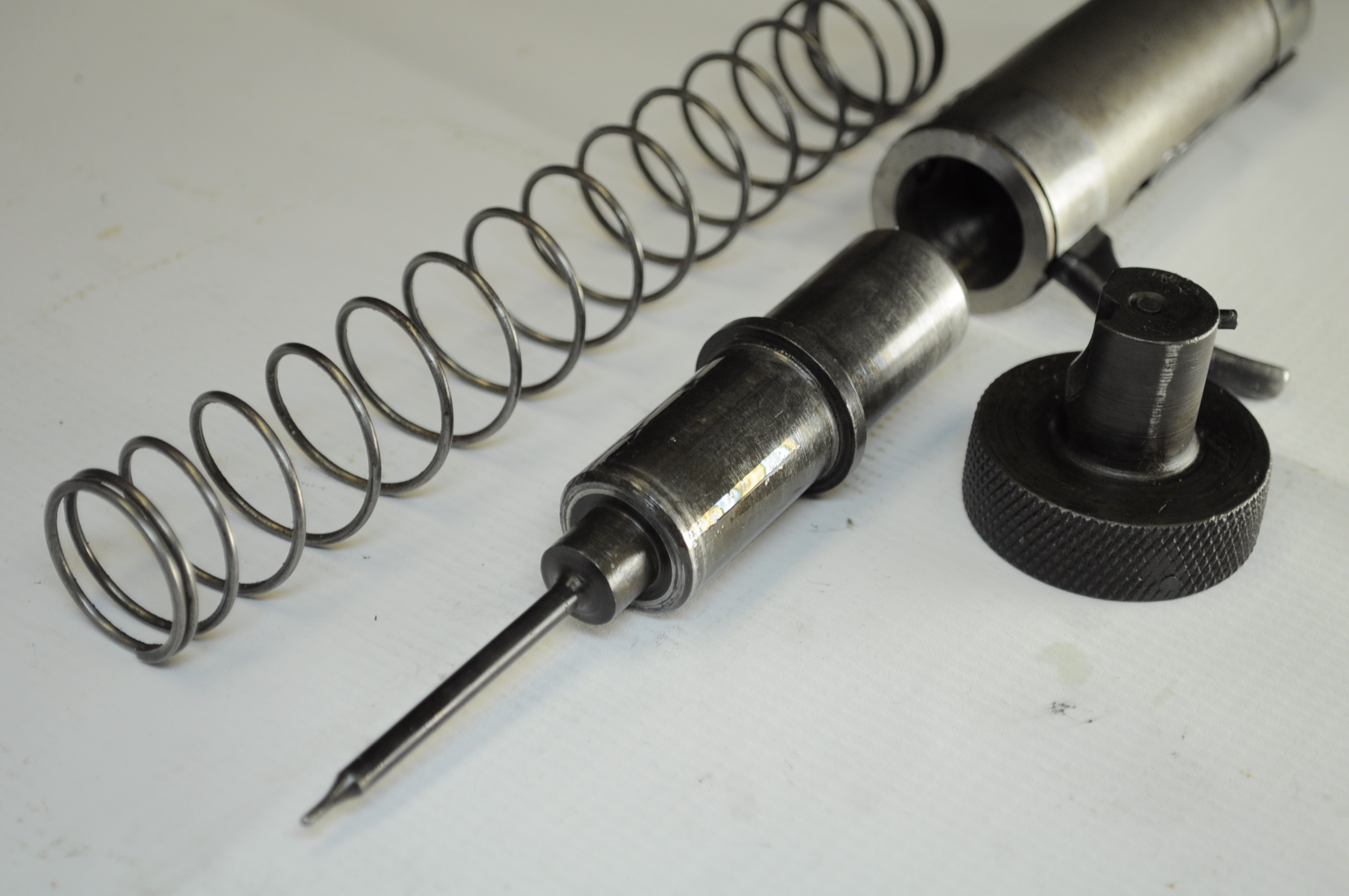 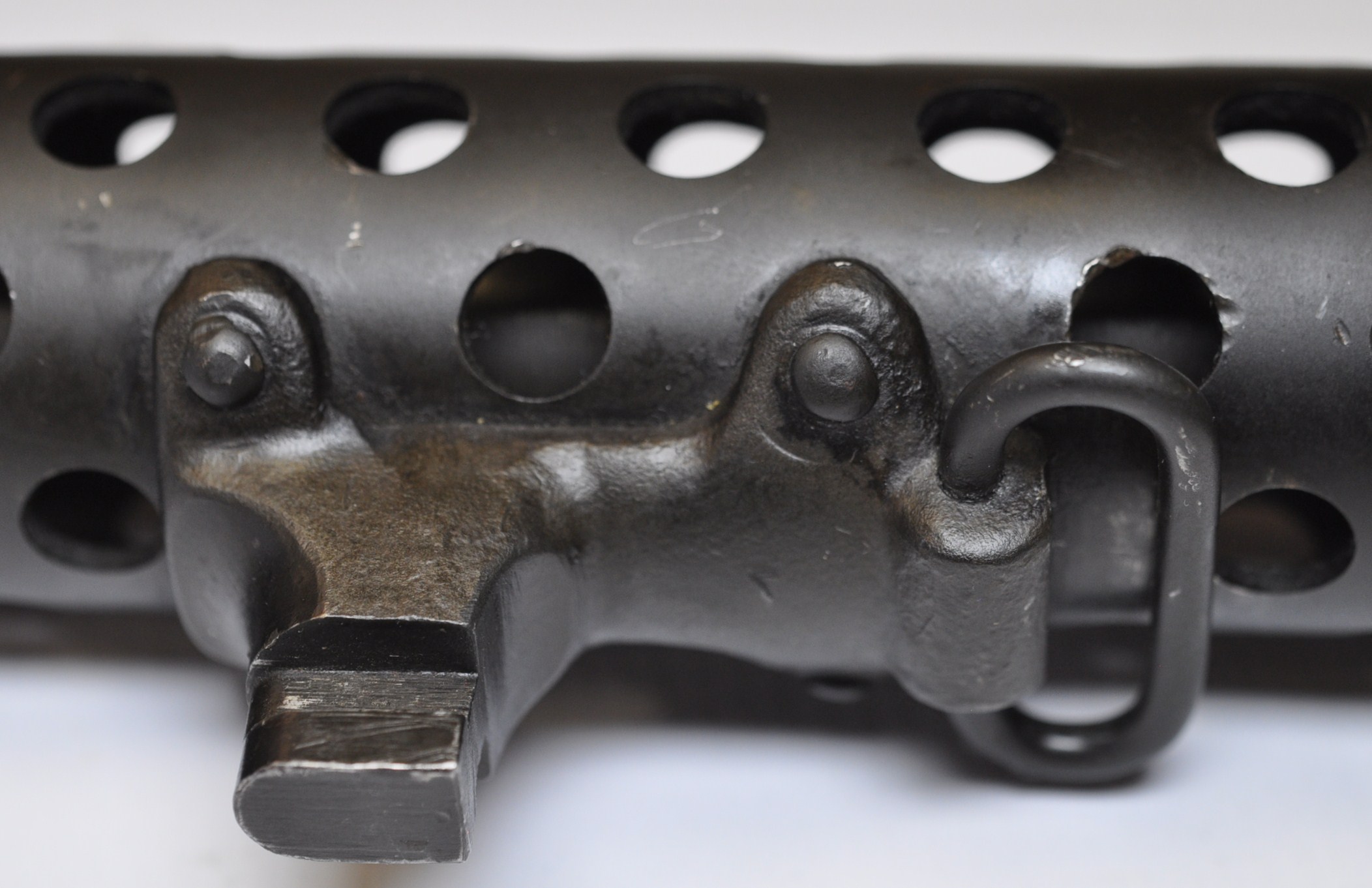 I see no disturbance of the surface metal finish turning or grinding marks on the exterior of the receiver where the alleged joint appears. There is no remanufacturing weld there that can be discerned in the pic and it would be evident since, also, the metal does not appear to be refinished. There are remants of the original black paint in various joints, crevices and places in the pics so it cannot have been refinished. The guns were phosphated and painted black prior to being issued to the Brit Navy. Black enamel was commonly used as an anti-corrosive agianst the salt environment.
I see no issues with the gun as an original example as pictured.
A form 4 is for taxed individual transfer only, not original registration, and would not indicate anytning about the original registration form or date unless it is a transfer that predates the end of the 68 Amnesty which would comfirm pre-Amnesty registration and thus, C+R status.
The gun appears to me to be typical in condition and finish of most of the vintage Lanchesters that I have encountered. Lanchesters were a popular import during the DEWAT years as many were available on the post-war surplus small arms market and they were cheap.
None of the above assumes anything beyond what is evident in the pics. Lanchesters have not been found to have been falsely registered as C+R, transferable but are actually pre-May samples, dated post-Ammesty on original registration but without having been cut and welded or a new receiver tube, etc, etc. They have never been popular enough or valuable enough to temp that kind of shenanigans.FWIW

I can see the marks you refer to and I can say that Ive got 3 Lanchesters and none have a join like that. However I cant see how such a good join could be achieved if not done during production. The tubes were machined to size at factory so Im confident as already said, that it is a join but a production join and not a re-weld.

I can also say the early Mk1s were a very nice blue and everything was screwed together which makes stripping and cleaning very easy.

its being re-examined by a forum member later this week and test fired...looking for a 2nd weld under the mag well, looking at form 4's and documents to date its registration....with the finish- i see various hacks,etc and there is finish there...its why i question its original finish....it looks too good....the wood has hacks, yet the metal is in better shape it seems....i would sure like to believe its an original finish gun....either way its a correct finish and if its original its just a bonus....the reweld detracts from the value some and on resale will always be an issue that will come up. If its factory i can accept it for a slight price adjustment.  I still am hopeful and should make a decision on it later this next week.....my last subgun purchase most likely

I sure like that Lanchester stock and magazine well!
Mine is just too shiny.

Interesting that the gun shown has the early Mk.1 tangent rear sight, but lacks the semi-auto selector from the trigger guard (a feature of the MK 1* guns).
The bolt handle is also MK1.

Mag housing is stamped MK1 (no *) and shows Sterling as the maker.

I looked into Lanchester history and I see it discussed how there was a point where they were using up old parts and some have bits of both models. I believe they did the same with Thompsons. No part goes to waste

I strongly prefer the ladder sight

If it shoots a bit off I can adjust it

Not many Mk1 Lanchesters were ever made, only a few hundred were made before the change to remove the semi auto function. The first one hundred or so had steel mag wells but production costs in money and time meant it was substituted for gun metal quite quickly. They also started welding the screws of the TMH and sight into place before removing the need for screws altogether. The early guns also had a very fine blues finish which didnt last long.

Confirmed tonight it is a C&R gun.  Current owner picked it up using a FFL-03.  Hope to get more info by next week.

gun has been viewed a 2nd time. no welds. im told holes from the trigger group and holes under the rear sight

waiting for pics of the trigger group, but i found one that i think is the same as the one  im looking at...8 screws hold in the trigger group...judging by my pic above it looks like 1 screw fell out

Holes are normal, they were originally intended to be screwed only but they fell out and those that had already been screwed, got welds. Those that hadnt been built yet got welded only. That is except the Mk1 sight which was always screwed and later ones screwed and welded.

I think the photo above is of my gun.

Just checked my photobucket and it is my photo, I thought I recognised it.

the offer has been made on this gun...just waiting for approval and paper work...id like to buy this

If you need or want anymore let me know. The trigger disconnect shows the original full auto/semi auto version. These were later welded solid or new full auto only triggers fitted.

Back to Sten and Sterling Message Boards